The National Institute of Mental Health archives materials that are over 4 years old and no longer being updated. The content on this page is provided for historical reference purposes only and may not reflect current knowledge or information. 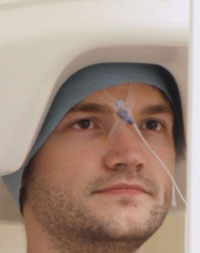 Images of the brain's fastest signals reveal an electromagnetic marker that predicts a patient's response to a fast-acting antidepressant, researchers have discovered.

"Such biomarkers that identify who will benefit from a new class of antidepressants could someday minimize trial-and-error prescribing and speed delivery of care for what can be a life-threatening illness," said Carlos Zarate, M.D., of the National Institute of Mental Health (NIMH), Mood and Anxiety Disorders Program.

In the new study at the National Institutes of Health in Bethesda, MD, depressed patients showed increasing activity in a mood-regulating hub near the front of the brain while viewing flashing frightful faces - the more the increase, the better their response to an experimental fast-acting medication called ketamine. By contrast, healthy controls showed decreasing activity in this brain area under the same conditions.

Two years ago, Zarate and colleagues reported that ketamine, which targets the brain chemical glutamate, can lift depressions in just hours instead of the weeks it takes conventional antidepressants, which work through the brain chemical serotonin. Evidence suggests that glutamate likely acts closer to the source of the depression than serotonin, and is not dependant on slower mechanisms, such as the synthesis of new neurons.

To find out if ACC activity might also forecast response to glutamate-targeting medications, the NIMH researchers imaged the brain activity of 11 depressed patients and 11 healthy participants, using magnetoencephalography (MEG). This imaging technology can non-invasively detect brain electromagnetic activity lasting only milliseconds - the speed of communications in neural circuits - whereas other functional brain imaging techniques can only capture activity that last seconds or minutes, and some involve radiation exposure.

This precise timing enabled the MEG scanner to capture the brain's split-second responses to rapidly flashing pictures of fearful faces, a task known to activate the ACC. While healthy participants' ACC activity dropped off as they quickly habituated to the faces, patients' ACC activity showed an opposite trend. The more robust this increase, the more symptoms improved just four hours after a patient received a single infusion of ketamine.

“The ACC may be slow to react, but not completely impaired, in patients who respond to ketamine,” explained Cornwell.

The lag in ACC activity could be a window into the dysfunctional workings of the glutamate-related circuitry targeted by the medication, the researchers suggest. Ketamine's side effects make it a poor candidate for becoming a practical antidepressant, but the new findings are helping to focus the search for new treatments that work through the same mechanism, they say. 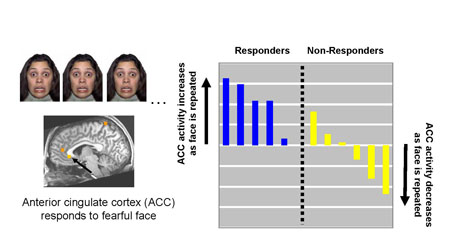 The degree of increased activity in a mood regulating hub called the anterior cingulate (arrow) in response to flashing frightful faces predicted a patients' response to a fast-acting antidepressant mechanism. MEG data superimposed on anatomical MRI image of the brain. 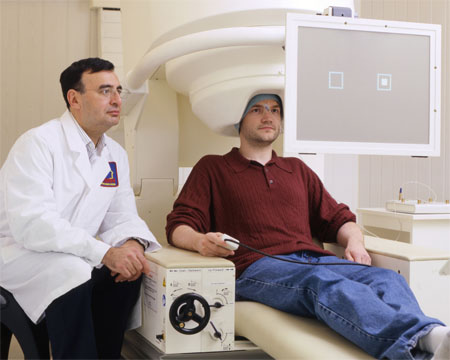