The National Institute of Mental Health archives materials that are over 4 years old and no longer being updated. The content on this page is provided for historical reference purposes only and may not reflect current knowledge or information.

An experimental drug that lifts depression in hours likely works by rapidly stimulating connections between brain cells, a study in rats has revealed. The drug, called ketamine, quickly generated such synapses in a brain circuit implicated in human depression by triggering a key enzyme.

"Discovery of this cellular mechanism helps point the way to development of a ketamine-like agent that could become a practical, rapid-acting treatment for depression," said NIMH grantee Dr. Ronald Duman, of Yale University, who led the research team.

Duman, Dr. George Aghajanian, and colleagues, report on their findings in the August 20, 2010 issue of the journal Science.1

Conventional antidepressants fail to help up to 40 percent of depressed patients and take at least a few weeks to begin working. Studies in both major depressive disorder and bipolar depression by NIMH intramural scientists have found that 70 percent of such treatment-resistant patients improve dramatically within a day after receiving just one dose of ketamine.2 Since it must be administered intravenously and risks significant side effects, ketamine itself isn't a practical treatment. So it has spurred a hunt for more suitable agents that work via the same mechanism. Until now, that mechanism was not well understood.

Commonly prescribed antidepressants work primarily through the brain's serotonin chemical messenger system, while ketamine works mainly through the glutamate system. Evidence suggests that the serotonin drugs trigger a cascade of events that stimulate the birth of new neurons, which eventually establish connections, or synapses, with other neurons, enhancing brain circuit activity. Since this process takes a few weeks, it's thought to explain the delay in response to the medications. Ketamine's speedy effects suggest that the glutamate mechanism is acting more directly — via pathways closer to the root of the problem.

It was known that ketamine blocks the binding of glutamate to a receptor protein on cell membranes called the NMDA receptor. To find out how this leads to an antidepressant effect, Duman's team explored the path of the signal triggered by the receptor blockade.

In the executive hub at the front of the brain — or prefrontal cortex — of rats, they discovered that a low dose of ketamine rapidly activates an enzyme, called the mammalian target of rapamycin (mTOR), that makes proteins forming the connections between neurons, or synapses. Neither conventional antidepressants nor ECT similarly activated mTOR.

Stress and depression produce the opposite effect of ketamine, causing synapses to shrivel. A single dose of ketamine boosted levels of synapse-associated proteins within 2 hours and increased the number of neuronal "spines" — or budding synapses — within 24 hours. It also rapidly reversed depression-like behavior that developed in rats exposed to stress. These effects lasted at least a week. Injection of rapamycin, which blocks mTOR, blocked ketamine's ability to produce such beneficial neuronal and behavioral effects. Another agent that also blocks the NMDA receptor performed similarly to ketamine in these tests.

The research identifies the key cellular signaling pathway by which ketamine works. It demonstrates that mTOR is required for ketamine to enhance synapse formation.

"Rapid activation of the mTOR signaling pathway may be an important and novel strategy for the rational design of fast-acting antidepressants," note the authors of an accompanying editorial in the same issue of Science.3 "The exciting results also demonstrate that ketamine may be a useful tool to identify molecular mediators of rapid antidepressant effects."

Ketamine's effects appear to be specific to the mTOR brain pathway, according to Duman. Any new treatment targeting the same pathway would have to be similarly specific, since mTOR also makes proteins in other parts of the body, and has been implicated in some types of cancers. Duman said his lab is currently investigating how stress affects the growth of neuronal spines, where synapses form, and how ketamine affects this process.

The new findings in rats complement ongoing human studies with ketamine at the NIMH Division of Intramural Research Programs. For example, the researchers there recently identified a brain signal detectible using a MEG scanner that predicts whether a patient will likely respond to ketamine treatment. 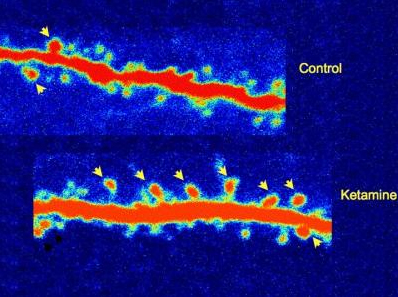