Awake Mental Replay of Past Experiences Critical for Learning

Awake mental replay of past experiences is essential for making informed choices, suggests a study in rats. Without it, the animals’ memory-based decision-making faltered, say scientists funded by the National Institutes of Health. The researchers blocked learning from, and acting on, past experience by selectively suppressing replay – encoded as split-second bursts of neuronal activity in the memory hubs of rats performing a maze task.

“It appears to be these ripple-like bursts in electrical activity in the hippocampus that enable us to think about future possibilities based on past experiences and decide what to do,” explained Loren Frank, Ph.D., of the University of California, San Francisco, a grantee of the NIH’s National Institute of Mental Health (NIMH). “Similar patterns of hippocampus activity have been detected in humans during similar situations.”

Frank, Shantanu Jadhav, Ph.D., and colleagues, report on their discovery online in the journal Science, Thursday, May 3, 2012.

“These results add to evidence that the brain encodes information not only in the amount of neuronal activity, but that its rhythm and synchronicity also play a crucial role,” said Bettina Osborn, Ph.D., of the NIMH Division of Neuroscience and Basic Behavioral Science, which funded the research.

Frank and colleagues had discovered in previous studies that the rhythmic ripple-like activity in the hippocampus coincided with awake mental replay of past experiences, which occurs during lulls in the rats’ activity. The same signal during sleep is known to help consolidate memories. So the researchers hypothesized that these awake ripple states are required for memory-guided decision-making. To test this in the current study, they selectively suppressed the ripple activity without disturbing other functions, while monitoring any effects on the animals’ performance in a maze task.

Individual neurons in certain areas of the hippocampus become associated with a particular place. These place cells fire when the animal is in that place or – it turns out – is just mentally replaying the experience of being in that place.

In the experimental situation, the rat needs to learn a rule to get a reward. It must remember which of two outer arms of a W-shaped maze it had visited previously and alternate between them – visiting the opposite arm after first visiting the center arm. The ripple activity occurs when rats are inactive during breaks between trials.

Place cells associated with the maze fire in rapid succession and in synchrony with other neurons in the neighborhood. The same place cells fire in the same sequence as they did when the rat first walked through the maze – suggesting that the rat is mentally replaying the earlier experience, but on a much faster timescale.

In the current study, an automatic feedback system shut down place cell firing, via mild electrical stimulation, whenever it detected ripple activity, thereby also preventing the replay of the maze memory. Without benefit of mental replay, rats’ performance on the maze task deteriorated. The impairment was in the animals’ spatial working memory – their ability to link immediate and earlier past experience to the reward. This ability was required to correctly decide which outside arm to visit after exiting the center arm during outbound trials.

The researchers propose that awake replay in the hippocampus provides such information about past locations and future options to the brain’s executive hub, the prefrontal cortex, which learns the alternation rule and applies it to guide behavior.

Even though the replay events in rats last just a fraction of a second, Frank notes that they are not unlike our own experience of memories, which tend to compress often lengthy events into snippets of just the highlights of what happened to us.

“We think the brain is using these same ripple-like bursts for many things,” he explained. “It’s using them for retrieving memories, exploring possibilities – day-dreaming – and for strengthening memories.” 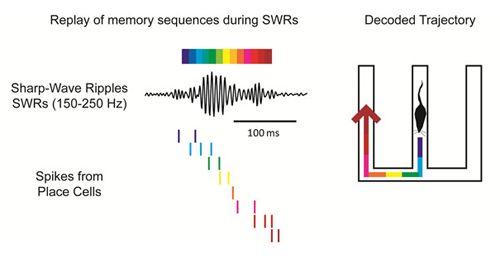 During breaks in trials when the rat was awake but inactive, areas in the brain’s memory hub emitted split-second bursts of ripple-like electrical activity (SWRs). This indicated that the rat was mentally replaying an earlier experience in the maze. Individual neurons in the areas become associated with a particular place. These place cells spike when the animal is in that place or – it turns out – is just mentally replaying the experience of being in that place. Embedded in the ripple-like signal above are place cells spiking in the same sequence as they did when the rat first walked through the maze. (Color-coded hatch marks match the path in the maze.) Rats’ performance in the maze task faltered when these awake mental replay events were blocked, revealing that they are important for memory-guided decision-making. 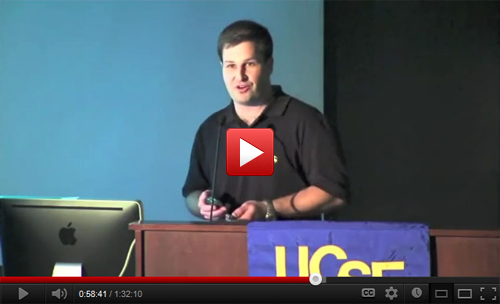