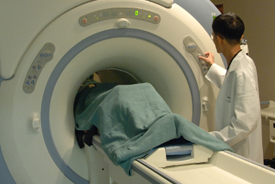 A technique combining computer-based pattern recognition and brain imaging data accurately distinguished teens at risk for mental disorders from those with low risk and may someday be useful in predicting risk in individuals, according to an NIMH-funded study published February 15, 2012, in the journal PLoS One.

Research on risk for mental disorders generally describes risk factors that apply to groups. To date, no biological measures can accurately predict an individual’s risk of future mental disorders.

Mary Phillips, M.D., of the University of Pittsburgh School of Medicine, and colleagues evaluated the use of computer-based techniques that automatically find patterns in data—these techniques are collectively called machine learning—with functional magnetic resonance imaging (fMRI) data. The researchers obtained fMRI data from 32 teens, half of whom had at least one biological parent diagnosed with bipolar disorder and were therefore at genetic risk for future psychiatric disorders. The other half of teens had no history of mental disorders either personally or in their immediate families.

The teens’ brain activity was assessed as they identified the gender of actors depicting various emotional facial expressions (happy, fearful, or neutral) in a series of photographs. Previous research has linked various mental disorders, especially depression and bipolar disorder, with abnormal patterns of brain activity during this task. Based on this fMRI data, the researchers used machine learning to calculate each participant’s odds for future mental illness.

The participants were also assessed clinically and with fMRI at the start of the study, and clinically assessed again about two years later, on average. Long-term follow up is ongoing, with successive face-to-face assessments occurring every other year.

At the two-year follow up, none of the at-risk teens had developed bipolar disorder, but six were diagnosed with major depression or an anxiety disorder. Among all the at-risk teens identified through machine learning, these six had received the highest odds for belonging to the at-risk group.

Three of the four at-risk teens misidentified as belonging to the low risk group at the start of the study remained healthy at the second assessment. Clinical information for the fourth teen was not available at the time of follow-up.

Though still a very preliminary study, according to the researchers, machine learning combined with fMRI shows promise for predicting individual risk of developing future mental disorders, especially in at-risk populations.

Larger studies using machine learning and fMRI will help to better define the extent to which pattern recognition techniques can accurately identify people at risk for future mental disorders. Research in this area may also inform early treatment or prevention efforts.