Eye contact during early infancy may be a key to early identification of autism, according to a study funded by the National Institute of Mental Health (NIMH), part of the National Institutes of Health. Published this week in the journal Nature, the study reveals the earliest sign of developing autism ever observed—a steady decline in attention to others’ eyes within the first two to six months of life.

“Autism isn’t usually diagnosed until after age 2, when delays in a child’s social behavior and language skills become apparent. This study shows that children exhibit clear signs of autism at a much younger age,” said Thomas R. Insel, M.D., director of NIMH. “The sooner we are able to identify early markers for autism, the more effective our treatment interventions can be.”

Typically developing children begin to focus on human faces within the first few hours of life, and they learn to pick up social cues by paying special attention to other people’s eyes. Children with autism, however, do not exhibit this sort of interest in eye-looking. In fact, a lack of eye contact is one of the diagnostic features of the disorder.

To find out how this deficit in eye-looking emerges in children with autism, Warren Jones, Ph.D., and Ami Klin, Ph.D., of the Marcus Autism Center, Children’s Healthcare of Atlanta, and Emory University School of Medicine followed infants from birth to age 3. The infants were divided into two groups, based on their risk for developing an autism spectrum disorder. Those in the high risk group had an older sibling already diagnosed with autism; those in the low risk group did not.

Jones and Klin used eye-tracking equipment to measure each child’s eye movements as they watched video scenes of a caregiver. The researchers calculated the percentage of time each child fixated on the caregiver’s eyes, mouth, and body, as well as the non-human spaces in the images. Children were tested at 10 different times between 2 and 24 months of age.

By age 3, some of the children—nearly all from the high risk group—had received a clinical diagnosis of an autism spectrum disorder. The researchers then reviewed the eye-tracking data to determine what factors differed between those children who received an autism diagnosis and those who did not.

“In infants later diagnosed with autism, we see a steady decline in how much they look at mom’s eyes,” said Jones. This drop in eye-looking began between two and six months and continued throughout the course of the study. By 24 months, the children later diagnosed with autism focused on the caregiver’s eyes only about half as long as did their typically developing counterparts.

This decline in attention to others’ eyes was somewhat surprising to the researchers. In opposition to a long-standing theory in the field—that social behaviors are entirely absent in children with autism—these results suggest that social engagement skills are intact shortly after birth in children with autism. If clinicians can identify this sort of marker for autism in a young infant, interventions may be better able to keep the child’s social development on track.

“This insight, the preservation of some early eye-looking, is important,” explained Jones. “In the future, if we were able to use similar technologies to identify early signs of social disability, we could then consider interventions to build on that early eye-looking and help reduce some of the associated disabilities that often accompany autism.”

The next step for Jones and Klin is to translate this finding into a viable tool for use in the clinic. With support from the NIH Autism Centers of Excellence program, the research team has already started to extend this research by enrolling many more babies and their families into related long-term studies. They also plan to examine additional markers for autism in infancy in order to give clinicians more tools for the early identification and treatment of autism. 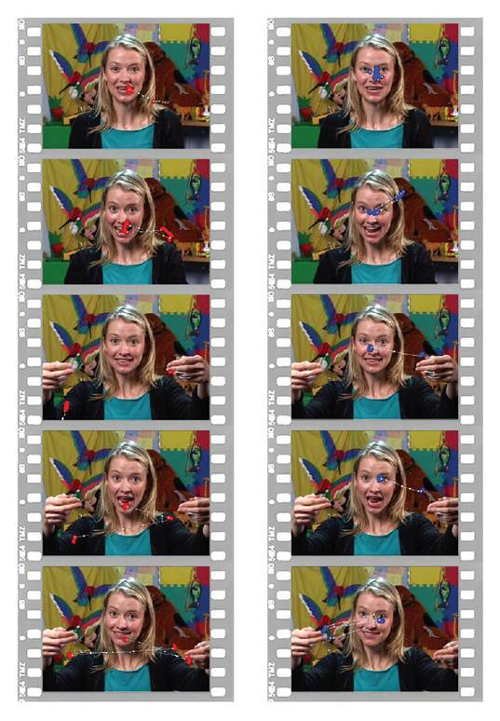 Jones W, Klin A. Attention to eyes is present but in decline in 2-6-month-old infants later diagnosed with autism. Nature, Nov. 6, 2013.