Brain Processes Underlying the Extinction and Reactivation of Fear Memories

Exposure therapy is a technique often used to reduce or eliminate learned fear. During exposure therapy, people are repeatedly exposed to a fear-provoking stimulus in the absence of a negative or aversive outcome. Over time, this exposure helps reduce emotional and physiological responses associated with the learned-fear. Although exposure therapy and fear extinction have shown effectiveness, fear memories can sometimes relapse over time — an event called “spontaneous recovery.” 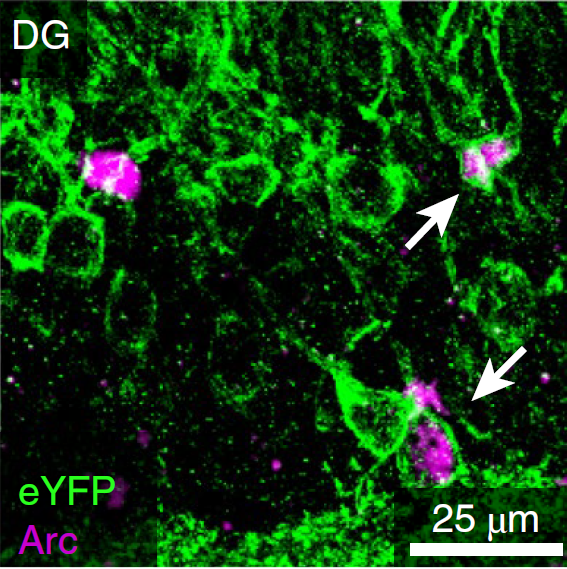 Research suggests that spontaneous recovery may occur because extinction training does not erase fear memories. Instead, research suggests that extinction training creates a new memory that either suppresses the fear memory or competes with it for expression. In a study published in 2019 in the journal Nature Neuroscience, researchers funded by the National Institute of Mental Health investigated the neurobiological changes that occur in the brain circuits of mice when contextual fear memories — fear of a place where an aversive event occurred — are formed and extinguished.

The researchers focused on part of the hippocampus — a brain structure involved in learning and memory — called the dentate gyrus. The dentate gyrus contains groups of neurons that are activated during acquisition of a memory and reactivated during memory recall. These neurons are called “engram cells,” and their reactivation is necessary for memory recall. The researchers used techniques to genetically tag and manipulate engram cells to see how their activity changed during the formation, extinction, and spontaneous recovery of a fear memory.

Together, these results suggest that in mice, fear acquisition and fear extinction recruit different groups of engram cells in the dentate gyrus and that interaction between these two groups of cells might be involved in fear recovery following extinction learning. Fear relapse is a challenge for successful exposure therapies. These findings point to brain mechanisms that could be explored as potential therapeutic targets for fear-associated behaviors in humans.