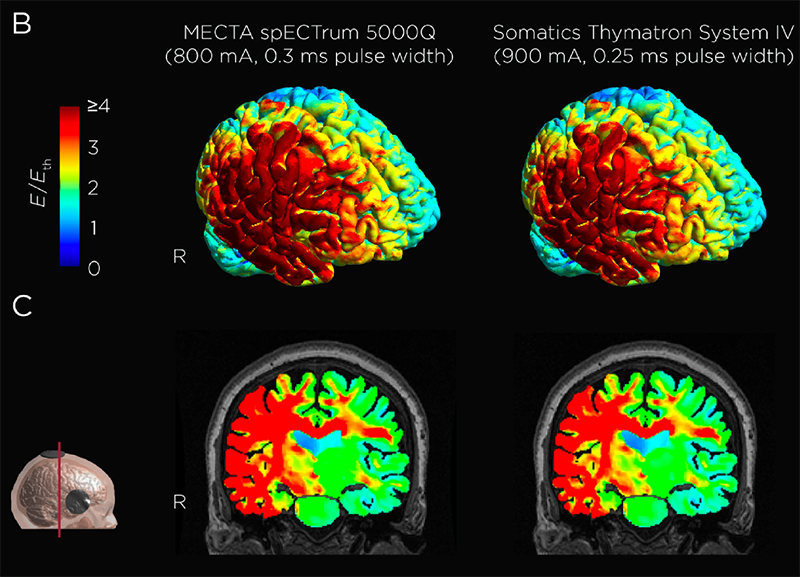 Caption: Stimulation strength on the cortical surface of the brain (B) and in a mid-coronal brain slice (C) produced by the two ECT systems used in the study (MECTA spECTRUM 5000Q and Somatics Thymatron System IV). Image courtesy of Elsevier.

The use of right unilateral ultrabrief pulse (RUL-UB) electroconvulsive therapy (ECT) in combination with the antidepressant venlafaxine to treat depression in elderly patients is well tolerated and results in minimal neurocognitive side effects, according to a new NIH-funded study published in the American Journal of Geriatric Psychiatry.

Depression is a leading cause of disability in older adults. Unfortunately, some older adults receive little to no benefit from standard treatments for depression, such as medication, psychotherapy, or transcranial magnetic stimulation. For this reason, elderly patients are sometimes prescribed ECT, which is known to be effective at relieving treatment-resistant depression.

“Although ECT has been shown to effectively treat depression in older adults, concerns about adverse neurocognitive side effects — particularly in those who are already experiencing cognitive decline or dementia — stop many from utilizing this treatment,” said Sarah Lisanby, M.D., lead study author and director of the NIMH Division of Translational Research. “This study provides evidence on the safety and tolerability of ECT in the elderly.”

The effects of ECT on neurocognitive functions — such as processing speed, attention, learning, memory, and executive functioning — have been studied primarily in middle-aged populations. However, these studies report inconsistent findings. To better understand the effects of ECT on neurocognitive abilities in older patients, the researchers examined data from Phase 1 of the Prolonging Remission in Depressed Elderly (PRIDE) study, a multi-center clinical trial* focused on ECT treatment for depression in patients between the ages of 63 and 77.

In Phase 1 of the PRIDE study, older adults with depression were treated with RUL-UB ECT and the antidepressant venlafaxine. RUL-UB ECT sessions occurred three times per week for between 5 and 17 sessions, depending on how quickly participants achieved remission. The researchers assessed participants at baseline and 72 hours after the last RUL-UB ECT treatment in multiple cognitive areas, including attention and processing speed, verbal fluency, verbal learning and memory, autobiographical memory consistency, and executive functions.

“Although ECT has been in use for eight decades, the advances in treatment delivery reflected in the PRIDE study demonstrate that modern ECT remains a viable intervention option for older people with severe depression,” said co-author Matthew Rudorfer, M.D., chief of the Adult Psychopharmacology, Somatic, and Integrated Treatment Research Program in the NIMH Division of Services and Intervention Research. “This option enhances our ability to personalize treatment.”

The results of this study show that while there is some decline in cognitive skills in older adults after treatment with RUL-UB ECT and venlafaxine, these declines are clinically modest. RUL-UB ECT treatment used in combination with venlafaxine seems to be well tolerated by patients into their late 70s — findings that may remove perceived barriers for those who would benefit from this treatment.

“Suicide death rates are highest in the elderly compared to other age groups. Removing barriers to effective treatment for severe depression can potentially save lives by preventing suicide,” added Lisanby. “The results of this study can help clinicians, patients, and families weigh the risks and benefits of ECT in this population.”