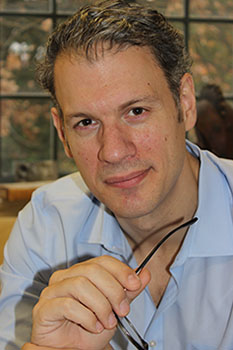 Argyris Stringaris, MD, PhD, FRCPsych is a Senior Investigator at NIMH who researches and treats depression and related conditions in young people. He is a Professor of Clinical Psychiatry at Georgetown University. He trained in Child & Adolescent Psychiatry at the Maudsley Hospital in London and received his PhD from the Institute of Psychiatry, King’s College London. He served as an Attending Physician (Consultant Psychiatrist) at the National and Specialist Mood Disorder Clinic at the Maudsley and was a Senior Lecturer at the Institute of Psychiatry. He held an advanced Wellcome Trust fellowship and his research was funded by the National Institute of Health Research and the UK Biomedical Centre. His work on mood disorders has been awarded the 2014 Klingenstein Foundation Prize by the American Academy of Child and Adolescent Psychiatry, and the 2010 Research Prize from the European Psychiatric Association (EPA). His most recent book (co-authored with Eric Taylor) was published by Oxford University Press and awarded a High Commendation by the British Medical Association (2016). In 2018, Dr Stringaris was awarded the National Institute of Mental Health Outstanding Mentor Award. In 2018 Dr Stringaris was elected a Fellow of the Royal College of Psychiatrists as mark of distinction and recognition for his contributions to psychiatry. In 2019, Dr Stringaris received the 2019 Gerald L Klerman Young Investigator (under 45 years) Prize, the highest honor that the Depression and Bipolar Support Alliance gives to members of the scientific community. Also, Dr Stringaris was awarded the NIH Director’s Award for “for exemplary performance while demonstrating significant leadership, skill and ability in serving as a mentor.” Dr Stringaris is President Elect (2019-2021) for the International Society for Research in Child and Adolescent Psychopathology.