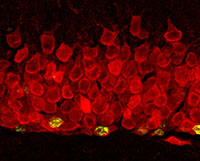 A naturalistic model of chronic stress that mimics depressive conditions in humans is psychosocial stress, achieved in mice by creating a housing condition in which an aggressive dominant mouse and a subordinate mouse live together separated by a perforated barrier. The persistent conflict results in socially defeated subordinate mice that show behavioral signs of increased anxiety, helplessness, anhedonia, and inappropriate social interaction, assessed in validated behavioral tests. We showed that environmental enrichment — housing in large cages with tubes, toys, and a running wheel — following social defeat restores the normal behavior of the subordinate mice. We found that adult neurogenesis is required for the restorative effects. We also found that the environmental enrichment is protective when it is given prior to the psychosocial stress, and these effects are neurogenesis-dependent and require normal fluctuations in the stress hormone corticosterone. The photomicrograph shows newborn cells (BrdU-positive; yellow) in the germinal layer of the dentate gyrus.

Neuroendocrine Components of the Stress Response 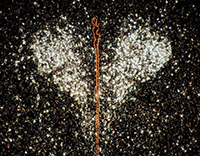 Our group previously studied the mechanisms of action of antidepressant drugs in animal models of depression. We documented changes in the hypothalamic-pituitary-adrenal (HPA) axis in response to acute or repeated immobilization in rats and mice. We showed that the corticotropin releasing hormone (CRH) and vasopressin systems of the hypothalamic paraventricular nucleus (PVN, seen in picture) and the locus coeruleus-norepinephrine system were involved in mediating both the effects of immobilization stress and compensatory actions of chronically administered antidepressant drugs. We showed similar kinds of changes in the HPA axis and in the hippocampus and bed nucleus of the stria terminalis, key way stations to the PVN, in animals given St. John's wort (Hypericum) chronically.

Parasynaptic Communication in the Nervous System 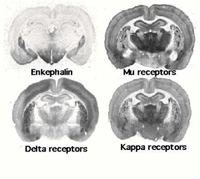 From paracrine to hormonal modes, parasynaptic actions of neuroactive molecules mediating intercellular information transfer are numerous and diverse. Anatomical evidence for parasynaptic communication includes nonsynaptic receptors, diffusion of neuroactive molecules from release sites, and nonsynaptic and even non-vesicular release. Functional actions in this mode may be inferred on the basis of mechanisms of drug effects, involvement of glia in interneuronal communication, cellular responses in culture, and hormone-like actions of neurotransmitters. It is concluded that parasynaptic mechanisms comprise the foundation for a large body of current neuroscience research. 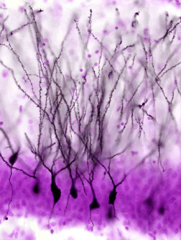 We sought to determine whether the fragile X mental retardation gene fmr1 is regulated in long-term potentiation (LTP) and electroconvulsive shock (ECS). In situ hybridization of fmr1 mRNA in hippocampus of rats given LTP in vivo showed no change in fmr1 mRNA levels relative to control. However, ECS induced a selective increase in fmr1 mRNA expression in the dentate gyrus granule cell layer at 6 h post-ECS. The ECS paradigm may unmask relevant activity-dependent regulatory mechanisms that modulate fmr gene transcription in vivo.

Techniques for localizing receptors recognized by neurotransmitters and psychoactive drugs were developed earlier in this laboratory. Brain maps of opioid (e.g. morphine) and cannabinoid (e.g. cannabis: marijuana) receptor distribution have been published. Opioid receptors are found in all parts of the brain, notably in sensory waystations and areas that control emotion (hypothalamus and amygdala), cognition (cerebral cortex), and pleasure (ventral forebrain). Cannabinoid receptors are localized in areas that control movement (basal ganglia, cerebellum), cognition (cerebral cortex), and attention and memory (hippocampus; see picture below).

Cannabinoid receptors are notably sparse in areas that control heart rate and respiration (medulla), explaining why there are not fatal overdoses of marijuana. Cannabinoid receptors are also located in areas that control emesis (nucleus of the solitary tract) and pain (see bottom), suggesting medical potential of marijuana. Receptors are not localized on ventral forebrain dopamine neurons that are implicated in abuse potential of psychoactive drugs, so effects of marijuana on "reward" systems are indirect.

Electrophysiological, neurochemical, and behavioral studies have shown that cannabinoids (marijuana-like drugs) suppress pain neurotransmission. To address the underlying mechanism, we have identified the locations of cannabinoid receptors in primary pain pathways using the techniques of in situ hybridization histochemistry and in vitro receptor binding/autoradiography. Central cannabinoid CB1 receptors are synthesized in cells of the dorsal root ganglia (see picture at left) and inserted on terminals in the spinal cord. In the dorsal root ganglia, identifying which cells carry pain information is achieved by labeling for substance P mRNA (marker of nociceptive cells).

In double-label experiments, we have determined that only a small fraction of substance P-positive cells also expresses CB1 mRNA. Furthermore, in the spinal cord where the nerve rootlets terminate in the dorsal horn, only a portion of cannabinoid receptors is found presynaptically on central terminals of primary afferents, and the remainder is located on processes of the spinal cord itself. We think that these results have implications for how cannabinoids may work in chronic pain states. A differential anatomical basis underlying cannabinoid and mu opioid modulation of primary afferent transmission is supported.

Whereas mu opioid receptors in spinal cord are associated predominantly with thin-diameter primary afferents, cannabinoid receptors are localized to both thin and coarse diameter fibers. These differences may provide a basis for the possibility that cannabinoids may relieve pain when traditional opiate drugs fail.