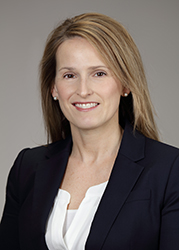 Dr. Shelli Avenevoli has been named deputy director of NIMH. She steps into the post having served as acting deputy during NIMH’s search for a new permanent director. Avenevoli brings to the role a background and research interest in developmental science and epidemiology and a record of leadership within the NIMH organization and in numerous cross-institute and interagency scientific collaborations.

Avenevoli came to NIH in 2001, joining the NIMH intramural research program as a staff scientist. Among the studies in which she was a co-investigator was the National Comorbidity Survey—Adolescent Study, which aimed to gather information about the prevalence and course of mental disorders in children and adolescents. She moved to NIMH’s extramural program in 2005, ultimately becoming chief of the Developmental Trajectories of Mental Disorders Branch. While there she guided the reorienting of NIMH’s translational neurodevelopmental research portfolio towards research emphasizing etiology, brain development, and neurobiological function. She also led the building of a research program aimed at bipolar disorder and early, chronic irritability in children.

She has played a leadership role in a lengthy list of collaborative initiatives and reports focusing on development.  Most recently, she served as the NIMH representative to the planning committees for the Environmental Influences on Child Health Outcomes Study (ECHO) and the Adolescent Brain Cognitive Development Study (ABCD).

As acting deputy director, she helped direct the revision and implementation of NIMH’s Strategic Plan and the Institute’s process for evaluating and approving funding opportunity announcements. Of the latter, former acting NIMH director Bruce Cuthbert said, “the revised process involved more staff members in the initiation and decision stages and resulted in better-targeted funding announcements." He praised Avenevoli’s “thoughtfulness and her ability to quickly distill major points and identify issues. She played a leadership role in the task of revising NIMH's funding announcements for clinical trials, including introducing different announcements for pharmaceutical, behavioral, and device-oriented trials to help investigators develop optimal trial designs.“

Prior to joining NIMH, Avenevoli received her Ph.D. in developmental psychology from Temple University, and completed an NIMH-funded postdoctoral fellowship in psychiatric epidemiology at Yale. Avenevoli’s contributions have been recognized by NIH and NIMH Director’s Awards, including the NIMH Director’s Award for Exceptional Scientific Leadership. NIMH director Joshua Gordon expressed his appreciation for what she brings to the post: “It is incredibly helpful—and a great pleasure—to have someone with Dr. Avenevoli’s insight and experience in the deputy role during a period of transition for me and for NIMH.”