Molecular profiling may be key to compiling brain’s “parts list”

“Before you can understand how the brain works, we believe that we need to understand the parts list,” says NIMH grantee Joseph Ecker, Ph.D.

He and his team at the Salk Institute have just taken a major step toward that goal. With funding from the NIH BRAIN Initiative, they have discovered a trove of neuronal subtypes and gene regulators, using a new method they developed. It allows for the discovery of subtypes based on their unique profiles of molecular switches that regulate gene expression within the cell. This opens the door to potentially discovering any changes in such profiles that may be traceable to specific neuron subtypes in brain disorders, say the researchers.

Ecker, Margarita Behrens, Ph.D., and colleagues, report on their discovery August 10, 2017 in the journal Science.

“We know the human brain has approximately 86 billion neurons—give or take—but we really don’t know much about how many different kinds of cells there are, what their functions are, or what goes wrong at the cellular level in different diseases,” explained Andrea Beckel-Mitchener, chief of the NIMH Functional Neurogenomics Program, which supports the study. “This work is a big leap forward in our quest to understand neuronal diversity, adding an important molecular dimension never before achieved.”

The BRAIN Initiative is helping researchers find new ways to classify brain cells. Traditionally, scientists were limited to describing cells only by their shape, location, or their electrical properties. The new method profiles molecular changes to the DNA (the genetic blueprint) known as epigenetic regulation. This is accomplished by sequencing the neuronal genomes in a way that detects modified DNA, producing a signature called the methylome.  It turns out that each cell type has a unique methylome, even though the DNA itself is the same in every cell.

In the frontal cortex, the researchers identified 16 neuronal subtypes in mice and 21 subtypes in humans. Neurons that slow down brain activity were found to share more regulatory elements across mice and humans than neurons that speed up brain activity. Some of the latter excitatory neuron types featured “superenhancer” regulators unique to humans. The greater diversity in neuron types found in humans reflects more complex neuronal development known to occur in the human brain, say the researchers. 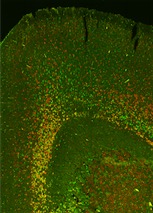