A team of NIMH intramural and grant-supported researchers has discovered a pattern of behavioral and genetic features seen in some cases of autism spectrum disorder (ASD) that could ultimately lead to identification of subgroups and improved treatment.

Children diagnosed with ASD who had spontaneous, non-inherited changes in autism-linked genes showed “muted” core autism symptoms relating to social behavior and language when compared to sex, age, and IQ-matched children with ASD without known genetic abnormalities. A key clue was that children with the spontaneous glitches—abnormal numbers of copies of genes or other mutations linked to functional impairments—tended to start walking later than usual, which is not typical of children with ASD. In fact, the odds of a child in this sample having a spontaneous abnormal gene finding increased by 17% for each month of delay in walking.

“Identifying individuals whose ASD is associated with a specific type of genetic abnormality may lead us to distinct processes ultimately traceable to specific causes, which could be targeted by more personalized interventions,” explained Audrey Thurm, Ph.D., of the NIMH Intramural Research Program. “In the meantime, our results can increase awareness that among children with an ASD diagnosis, certain characteristics like late walking are associated with genetic abnormalities.”

Thurm, NIMH grant-supported researcher Somer Bishop, Ph.D., of the University of California San Francisco, and colleagues, report on their identification of an emerging cluster of developmental, behavioral, and genetic markers in ASD, March 3, 2017 in the American Journal of Psychiatry.

Prior to the study, the estimated 10-15 percent of children with ASD who have non-inherited, or “de novo,” gene copy number variations or suspected disrupting, severe mutations had not been found to show specific patterns of ASD-related symptoms or delays in developmental milestones. The new discovery was made possible through a combination of advances in genomics technology, allowing for a large number of “high confidence” suspect genes to be identified, as well as more rigorous matching of children with and without genetic abnormalities than in previous studies. For example, the new study controlled for potentially confounding effects of IQ, which has been previously found to be lower in children with ASD with de novo mutations.

“While all children in this study met diagnostic criteria for ASD, those with genetic abnormalities showed subtle, yet potentially important, differences in their behavioral profiles when compared to appropriately matched children with no such abnormalities,” said Bishop. “These findings are in line with previous assertions that, as a group, de novo mutations may be best understood as conferring risk for neurodevelopmental problems more generally, rather than ASD core symptoms specifically.” 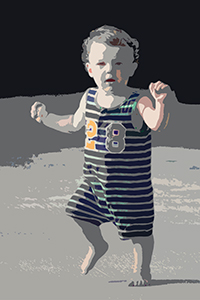