Researchers funded by the National Institutes of Health (NIH) have reached a milestone in their quest to catalog the brain’s “parts list.” The NIH BRAIN Initiative Cell Census Network (BICCN) has issued its first data release. Posted on a public web portal for researchers, it profiles molecular identities of more than 1.3 million mouse brain cells and anatomical data from 300 mouse brains – among the largest such characterizations to date.

BICCN research teams focused initially on a key area of the mouse motor cortex, an area of the brain that controls movement, as a first major step in the 5-year effort. Initiated in 2017, the BICCN projects aim to build comprehensive, three-dimensional common reference brain atlases that will ultimately integrate molecular, anatomical and functional data on cell types in mouse, human and non-human primate brains. To expedite scientific impact, they are making their data immediately available to the research community via the web portal.

“No single research group could do this by themselves—they needed to leverage the power of a team,” explained Joshua Gordon, M.D., Ph.D., director of the National Institute of Mental Health (NIMH), which is helping to coordinate the BRAIN Initiative effort. “The BICCN is a product of nine different teams each bringing to bear their finely-honed tools to the same brain region at the same time. By doing so, they could compare results and create a unified resource for the community.”

The new molecular fingerprints cover comprehensive information on gene transcription and epigenomic signature maps of the brain cells.  Each type of cell is classified according to its molecular characteristics and identifiable by telltale marker genes.

“We are witnessing an unprecedented and accelerated evolution of technologies that permit molecular fingerprinting of individual cells,” noted Andrea Beckel-Mitchener, Ph.D., chief of Functional Neurogenomics Program at NIMH. “The BICCN projects enable new studies in the wider scientific community by providing novel tools and data to understand basic biology and disease conditions at the cellular level. Over the next few years, we expect similar data from millions of human cells that will help us understand what goes awry in human brain disorders.”

“We are proud to be a key part of this initiative, both as a developer of the cell types atlas and as the home for the Brain Cell Data Center (BCDC), which is designed to bring these data, tools and knowledge to the public,” added Michael Hawrylycz, Ph.D., Investigator at the Allen Institute for Brain Science, Seattle, Washington, one of the participating teams.

In a related development, NIH-funded researchers just announced the discovery of cellular secrets of key social behaviors – mating, parenting, and aggression – in the brains of mice, by combining a new imaging-based method of single cell analysis with a more established single cell gene sequencing method.

The ability of the imaging-based method to be used in intact tissue made it possible, for the first time, to pinpoint specific populations and gene expression characteristics of cells involved in the social behaviors. This is just one of the findings emerging from a new cell atlas of the mouse hypothalamus preoptic region, which is known to mediate key social behaviors and homeostatic functions, such as sleep, thirst, and thermoregulation.  The atlas mapped cells’ spatial organization, profiled gene expression, and identified activity markers.

The new evidence suggests that circuits comprised of neuron types with distinct gene expression signatures control such behaviors and functions. Distinct cell clusters in the brain were active in mating, parenting, and aggression. Depending on the behavior, telltale cell activity signatures characterized virgin females, aggressive virgin males and males that fathered mouse pups. In each case, the activated neurons tended to be of the type that reduce circuit activity. This line of research holds promise for unraveling how different brain cell types communicate to form functioning circuits and how this process may be disrupted in certain brain disorders, say researchers. 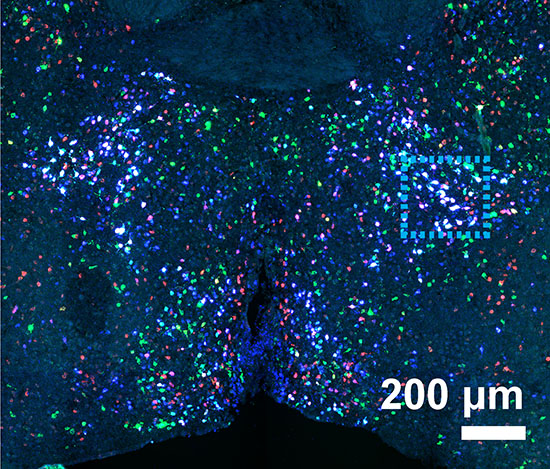 Neuronal activities for specific social behaviors map to a few cell clusters in the mouse hypothalamus preoptic region. For example, the same cluster of neurons (inside the blue square at upper right) is preferentially activated in virgin females, mothers and fathers displaying parenting behavior when exposed to mouse pups. In situ hybridization of telltale marker genes revealed the clusters in a virgin female preoptic region in image above.

About the Eunice Kennedy Shriver National Institute of Child Health and Human Development (NICHD): The NICHD sponsors research on development, before and after birth; maternal, child, and family health; reproductive biology and population issues; and medical rehabilitation. For more information, visit the NICHD website.