Researchers have developed a high-tech support system that can keep a large mammalian brain from rapidly decomposing in the hours after death, enabling study of certain molecular and cellular functions. With funding through the National Institutes of Health BRAIN Initiative, researchers developed a way to deliver an artificial blood supply to the isolated postmortem brain of a pig, preventing the degradation that would otherwise destroy many cellular and molecular functions and render it unsuitable for study. Importantly, although the researchers saw some preservation of flow through blood vessels and energy use, there was no higher level functional activity in the brain circuits. The scientific team, led by Nenad Sestan, M.D., Ph.D., of Yale University, New Haven, Connecticut, reports on their findings in the journal Nature.

“This line of research could lead to a whole new way of studying the postmortem brain,” explained Andrea Beckel-Mitchener, Ph.D., BRAIN Initiative Team Lead at the NIH’s National Institute of Mental Health, which co-funded the research. “The new technology opens up opportunities to examine complex cell and circuit connections and functions that are lost when specimens are preserved in other ways. It also could stimulate research to develop interventions that promote brain recovery after loss of brain blood flow, such as during a heart attack.”

Researchers’ ability to study the functional dynamics of an intact, isolated large postmortem brain has been hampered by cell death, clotting of small blood vessels and other toxic processes that degrade the tissue following loss of blood flow and oxygen. Freezing and other preservation methods allow for only static microscopic, biochemical or structural analyses.

To overcome these limitations, Sestan and colleagues created a system called BrainEx (after “ex vivo”), specially designed to attenuate some of the processes responsible for degradation of tissue in postmortem brains. The researchers used brains from a pork processing plant that would have otherwise been discarded. The system involves pumping a solution called BEx perfusate– a proprietary mixture of protective, stabilizing and contrast agents, that act as substitutes for blood – into the isolated brain’s main arteries at normal body temperature.

The results suggest that delivering protective agents to the brain through its dense network of blood vessels may hold potential for improving survival and reducing neurological deficits after trauma.

Among potential future applications, the researchers suggest BrainEx might be used to test how an experimental drug affects the intricate 3-D wiring of a large brain. The BEx system may also help researchers use postmortem brain specimens to study the effects of brain injury on cells and neural connections.

“BrainEx’s cell-protective formulations may someday find application in therapies for disorders such as stroke,” said Sestan.  “The isolated large mammalian brain’s capacity for restoration of microcirculatory, molecular and cellular activity has been underappreciated.”

The BRAIN Initiative was founded on the principle that new tools and advanced technologies are needed to accelerate scientific discoveries that can lead to a better understanding of brain function and human diseases.  While the researchers stress that BrainEx offers ample opportunities for scientific exploration in animal postmortem brains without restoration of brain circuit activity, they specify contingencies that would guard against crossing of ethical lines should any signs of such functions appear as the technology develops.

“As medical researchers, we have an ethical imperative to use the powerful tools developed by BRAIN Initiative researchers to help unravel the mysteries of brain injuries and diseases,” said Christine Grady, R.N., Ph.D., chief of the Department of Bioethics at the NIH Clinical Center. “It’s also our duty to work with researchers to thoughtfully and proactively navigate any potential ethical issues they may encounter as they open new frontiers in brain science. Since the launch of the BRAIN Initiative in 2013, NIH has been working with experts to address these questions.”

The BRAIN Initiative is funding a growing network of neuroethics researchers. NIH has also been working with experts, including the Neuroethics Working Group of the BRAIN Multi-Council Working Group, which reports to the FACA-chartered Advisory Councils of the 10 NIH institutes and centers that contribute to the NIH BRAIN Initiative.  These efforts have guided the integration of neuroethics across projects as our understanding and capabilities expand. NIH recently published an overview of its multi-faceted and proactive approach to navigate potential ethical implications of new technologies funded by the BRAIN Initiative.  A keystone of the NIH BRAIN Initiative’s neuroethics strategy is a set of Neuroethics Guiding Principles.  Further, the NIH organizes workshops to explore emerging areas of science that raise ethical questions, including one last year that focused on research with human neural tissue. 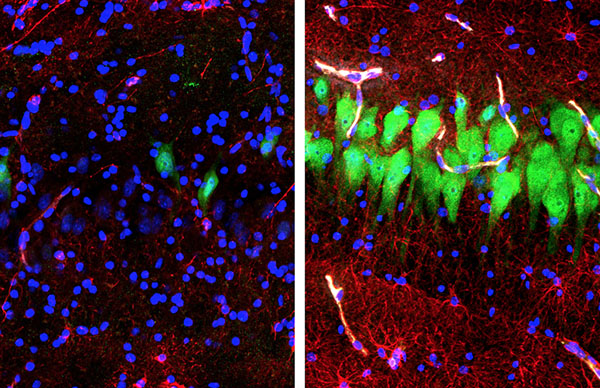 Immunofluorescent stains for neurons (NeuN; green), astrocytes (GFAP; red), and cell nuclei (DAPI, blue) in the hippocampal CA3 region of brains either unperfused for 10 hours after death (left) or subjected to perfusion with the BrainEx technology (right). After 10 hours postmortem, neurons and astrocytes normally undergo cellular disintegration unless salvaged by the BrainEx system.

The National Institute of General Medical Sciences (NIGMS) is a part of the National Institutes of Health that supports basic research to increase our understanding of biological processes and lay the foundation for advances in disease diagnosis, treatment, and prevention. For more information on the Institute's research and training programs, visit www.nigms.nih.gov.