At its annual meeting for 2020, the Carlos Zarate Jr., M.D. One of the highest honors in the fields of health and medicine, election to the Academy recognizes outstanding professional achievement and commitment to service. 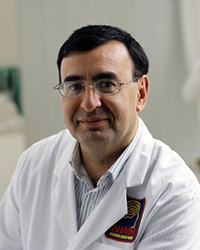 Dr. Zarate is chief of the Experimental Therapeutics and Pathophysiology Branch within the NIMH Intramural Research Program, where his research focuses on developing novel medications for treatment-resistant depression and bipolar disorder. Dr. Zarate’s research helped determine that a single infusion of ketamine can rapidly reduce depressive symptoms in people with treatment-resistant depression or bipolar depression. The identification of ketamine as a rapid-acting intervention for depression has provided hope for the many people for whom traditional depression treatments are not effective.

Dr. Zarate received his M.D. degree from the Catholic University of Cordoba in 1985. He went on to complete a Fellowship in Clinical Psychopharmacology at McLean Hospital from 1992-1993, after which he remained as a staff member until 1998. At the McLean Hospital Consolidated Department of Psychiatry, Harvard Medical School, Dr. Zarate served as the director of the Bipolar and Psychotic Disorders Outpatient Services, chair of the Pharmacy and Therapeutic Committee, and director of the New and Experimental Clinic. From 1998 to 2000, Dr. Zarate served as the chief of the Bipolar and Psychotic Disorders Program, associate professor of psychiatry, and chair of the Grand Rounds Committee at the University of Massachusetts Medical School. In January 2001, he joined the Mood and Anxiety Disorders Program at the NIMH as chief of the Mood Disorders Research Unit. In 2009, Dr. Zarate formed the Experimental Therapeutics and Pathophysiology Branch at NIMH.

Dr. Zarate is the recipient of multiple previous awards, including the Outstanding Psychiatrist Research Award from the Massachusetts Psychiatric Association; the Brain Behavior Research Foundation Award for Bipolar Mood Disorder Research; and numerous awards from both NIMH and the National Institutes of Health for mentorship, supervision, and for his outstanding scientific contributions.