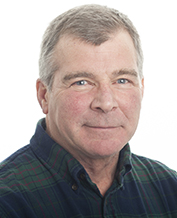 Dr. Gerfen received a B.A. from Amherst College and Ph.D. from Northwestern University. His doctoral research was on neural substrates of reward involving the prefrontal cortex and basal ganglia. During a post-doctoral fellowship in the Laboratory of Max Cowan at the Salk Institute, he developed the PHA-L axonal tracing technique with Paul Sawchenko, which has been used in over 1000 papers. In 1983, Dr. Gerfen was recruited by Ed Evarts to the Laboratory of Neurophysiology at NIMH. He was tenured in 1988 and served as Chief of the Laboratory of Systems Neuroscience from 1995 to 2016. Dr. Gerfen is recognized as having established fundamental principles of the functional organization of the basal ganglia.

Dr. Gerfen studies the functional organization of the cerebral cortex and basal ganglia. The basal ganglia are involved in transforming activity in the cerebral cortex into directed behavior. Using neuroanatomical tracing techniques, he mapped the connections of the circuits of this system, characterizing the compartmental nature of the input-output organization of the striatum, which is the main nucleus of the basal ganglia. His work established that the D1 and D2 dopamine receptors are segregated into two main pathways within the basal ganglia circuits.  This finding forms a cornerstone of the predominant model of neurologic disorders affected by diseases of the basal ganglia, including movement disorders such as Parkinson's disease, chorea, and dystonia, and mental disorders such as attention deficit hyperactivity disorder and depression. Dr. Gerfen is a Co-Investigator on the Gene Expression Nervous System Atlas (GENSAT) project, with Nat Heintz at Rockefeller University. This project provides transgenic mouse lines to the neuroscience research community with neuron specific expression of Cre recombinase. Over 200 Cre-driver lines have been characterized with expression limited to specific neuron types or specific brain regions (http://www.gensat.org/cre.jsp) . Characterization of these lines is provided on the lab website: http://gerfenc.biolucida.net.  Current work is focused on using BAC-Cre transgenic mouse lines to study the functional organization of the cerebral cortex and basal ganglia.