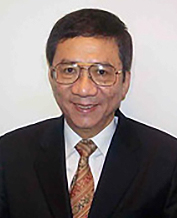 Dr. De-Maw Chuang received his Ph.D. degree from SUNY at Stony Brook and joined the Intramural research Program (IRP) of NIMH, NIH in 1973. He is the former Chief of the Molecular Neurobiology Section in the IRP, NIMH. His research at the IRP centered on the mechanisms and actions of mood stabilizing drugs for bipolar disorder, notably lithium and valproate. His group was one of the first to demonstrate neuroprotective effects of these drugs and to explore their potential use for the treatment of a variety of neurodegenerative and neuropsychiatry disorders such as Alzheimer's disease, stroke, traumatic brain injury and Huntington's disease. Dr. Chuang retired from the IRP and became a Scientist Emeritus in January 2016. His research at the IRP resulted in about 270 publications and over 20,000 citations with an H-index of 81.

For his innovative research, Dr. Chuang has received numerous honors and awards. These include the NIH Director’s Award in 1997, NARSAD (National Alliance for Research on Schizophrenia and Depression) Distinguished Investigator Award in 2002, Academician of Academia Sinica in Taiwan in 2006, Best Mentor of the Year from the NIMH Director in 2010, Outstanding Mentor Award from the IRP of NIMH in 2011, and Outstanding Alumni Award of National Taiwan University in 2012. Dr. Chuang has served as an advisor for multiple universities and research institutes in the U.S. and Taiwan including the Institute of Biomedical Sciences and Neuroscience Program of Academia Sinica as well as Taipei Medical University. He has been an Adjunct Professor of Uniformed Service University of Health Sciences at Bethesda, MD in the U.S., and a Chair Professor of Taipei Medical University, China Medical University and National Chiao-Tung University in Taiwan.

Dr. Chuang's current research interest is in the area of identifying important targets of mood stabilizers and defining their roles in the neuroprotection and pathogenesis as well as treatment of brain disorders.