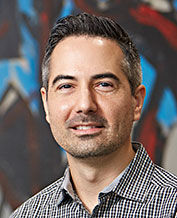 Dr. Merson is head of the Oligodendroglial Interactions Group. He received a BA/BSc(Hons) in romance languages, biochemistry and genetics in 1999 from the University of Queensland. In 2006, he received his Ph.D. from the University of Melbourne, where he investigated the role of the histone acetyltransferase Querkopf in adult neurogenesis. In 2007, he was awarded a postdoctoral fellowship by the National Health and Medical Research Council (NHMRC) and Multiple Sclerosis Research Australia (MSRA) to study mechanisms of myelin regeneration in the brain at the Howard Florey Institute. In 2013, he established his independent laboratory at the Florey Institute of Neuroscience and Mental Health as a Melbourne Neuroscience Fellow. In 2016, he was awarded a prestigious Australian Research Council Future Fellowship and moved to the Australian Regenerative Medicine Institute at Monash University to establish the Merson Group, where his team studied mechanisms that regulate myelin formation in health and disease. He joined the NIMH as a Staff Scientist in the spring of 2022.

Dr. Merson’s research aims to advance our understanding of oligodendroglial cell function in the central nervous system. His interests span from neurodevelopment to ageing and extends to perturbations in oligodendroglial homeostasis that contribute to mental health disorders and neurodegenerative diseases. A central interest is to clarify how changes in myelination contribute to experience-dependent neuroplasticity. Studies from his team and others have revealed that myelination is regulated in an activity-dependent manner. The implications are that myelin plasticity could play a critical role in learning and memory. His team will explore the role that adaptive myelination plays in acquiring and consolidating learnt behaviors. Another key interest is to elucidate how myelin regeneration is executed at the cellular and molecular level. A particular focus is probing the function of distinct populations of stem and progenitor cells in oligodendrocyte regeneration. His approach combines genetic fate-mapping with single nuclei RNA sequencing to define the developmental trajectories, cell-state transitions and transcriptional dynamics of oligodendroglial progenitor cells as they differentiate into myelin-forming oligodendrocytes.