Routine targeting of neurons for expression of exogenous genes would facilitate our ability to manipulate their internal milieu or functions, providing insight into physiology of neurons. The magnocellular neurons of the paraventricular (PVN) and supraoptic (SON) nuclei of the hypothalamus have been the objects of limited success by this approach. Here we report on the placement of the enhanced green fluorescent protein (eGFP) coding sequence at various locations within an oxytocin (OT) transgene. Placement within the first exon yielded little to no expression, whereas placement in the third exon (as an in-frame fusion with the carboxyl terminus of the OT preprohormone) resulted in cell-specific expression of eGFP in OT neurons. Furthermore, placement of the eGFP sequence downstream of a picornavirus internal ribosomal entry site (IRES), also in the third exon, allowed expression of the eGFP as a separate protein. Other coding sequences should now be amenable to expression within OT neurons to study their physiology. [see also: Zhang, B.-J., Kusano, K., Zerfas, P., Iacangelo, A., Young, W.S. III, and Gainer, H. Targeting of green fluorescent protein to secretory granules in oxytocin magnocellular neurons and its secretion from neurohypophysial nerve terminals in transgenic mice. Endocrinology 143:1036-1046, 2002]. 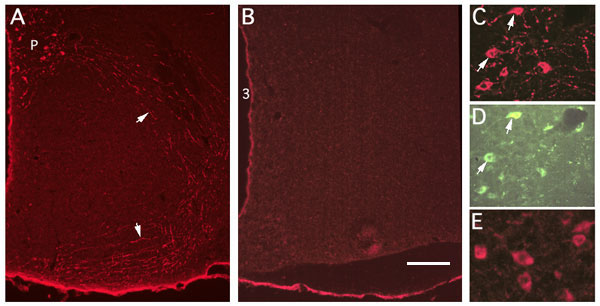 Immunohistochemical labeling of sections with antibodies against GFP (A,B,C,E). Sections are from an AI-03 animal (fusion protein; A,C,D), a control littermate (B) and from a JL-01 animal (IRES construct; E). Cells immunopositive for GFP (A, C) were labeled in a pattern indistinguishable from that seen when OT antibodies are used. No labeling was observed in control littermates (B). Note the labeling of fibers (arrows in A) on route from the PVN (P) to the pituitary in a section from an AI-03 animal. Individual immunostained neurons in the PVN are shown at higher magnification in AI-03 and JL-01 PVNs (C and E, respectively). Arrows in C and D indicate examples of neurons immunostained for GFP (C) that also show the fluorescence of eGFP (D). Bar equals 400µ (A-B) or 63µ (C-E). 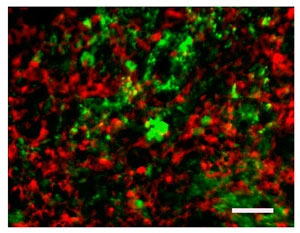 Immunostaining for VP (red) and fluorescence of eGFP in the posterior pituitary from an AI-03 animal. Note the essentially exclusive distribution of the two stainings. Bar equals 11µ.