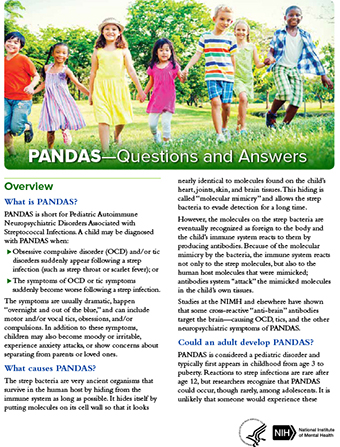 PANDAS is short for Pediatric Autoimmune Neuropsychiatric Disorders Associated with Streptococcal Infections. A child may be diagnosed with PANDAS when:

The symptoms are usually dramatic, happen “overnight and out of the blue,” and can include motor or vocal tics or both and obsessions, compulsions, or both. In addition to these symptoms, children may become moody or irritable, experience anxiety attacks, or show concerns about separating from parents or loved ones.

Strep bacteria are very ancient organisms that survive in the human host by hiding from the immune system as long as possible. They hide themselves by putting molecules on their cell wall so that they look nearly identical to molecules found on the child’s heart, joints, skin, and brain tissues. This hiding is called “molecular mimicry” and allows the strep bacteria to evade detection for a long time.

However, the molecules on the strep bacteria are eventually recognized as foreign to the body and the child’s immune system reacts to the molecules by producing antibodies. Because of the molecular mimicry by the bacteria, the immune system reacts not only to the strep molecules but also to the human host molecules that were mimicked; antibodies “attack” the mimicked molecules in the child’s own tissues. These antibodies that react to both the molecules on the strep bacteria and to similar molecules found on other parts of the body are an example of “cross-reactive” antibodies.
Studies at the National Institute of Mental Health (NIMH) and elsewhere have shown that some cross-reactive antibodies target the brain—causing OCD, tics, and the other neuropsychiatric symptoms of PANDAS.

Could an adult develop PANDAS?

PANDAS is considered a pediatric disorder and typically first appears in childhood from age 3 to puberty. Reactions to strep infections are rare after age 12, but researchers recognize that PANDAS could occur, though rarely, among adolescents. It is unlikely that someone would experience these post-strep neuropsychiatric symptoms for the first time as an adult, but it has not been fully studied.

It is possible that adolescents and adults may have immune-mediated OCD, but this is not known.

How is PANDAS diagnosed?

The diagnosis of PANDAS is a clinical diagnosis, which means that there are no lab tests that can diagnose PANDAS. Instead, health care providers use diagnostic criteria for the diagnosis of PANDAS (see below). At the present time, the clinical features of the illness are the only means of determining whether a child might have PANDAS.

The diagnostic criteria are:

If the symptoms have been present for more than a week, blood tests may be done to document a preceding strep infection.

Are there any other symptoms associated with PANDAS episodes?

Yes. Children with PANDAS often experience one or more of the following symptoms in conjunction with their OCD or tic disorder:

What is an episodic course of symptoms?

Children with PANDAS seem to have dramatic ups and downs in the severity of their OCD and tics. OCD or tics that are almost always present at a relatively consistent level do not represent an episodic course. Many children with OCD or tics have good days and bad days, or even good weeks and bad weeks.

My child has had strep throat before, and he has tics, OCD, or both. Does that mean he has PANDAS?

No. Many children have OCD, tics, or both, and almost all school-aged children get strep throat at some point. In fact, the average grade-school student will have two or three strep throat infections each year.

What does an elevated anti-strep antibody titer mean? Is this bad for my child?

The anti-strep antibody titer (i.e., the number of molecules in blood that indicate a previous infection) is a test that determines whether the child has had a previous strep infection.

An elevated anti-strep titer means the child has had a strep infection sometime within the past few months, and his or her body created antibodies to fight the strep bacteria.

Some children create lots of antibodies and have very high titers (up to 2,000), while others have more modest elevations. The height of the titer elevation doesn't matter, and elevated titers are not necessarily bad for your child. The test measures a normal, healthy response—the production of antibodies to fight off an infection. The antibodies stay in the body for some time after the infection is gone, but the amount of time that the antibodies persist varies greatly between individuals. Some children have "positive" antibody titers for many months after a single infection.

When is a strep titer considered to be abnormal, or "elevated"?

The lab at the National Institutes of Health considers strep titers between 0 and 400 to be normal. Other labs set the upper limit at 150 or 200. Because each lab measures titers in different ways, it is important to know the range used by the lab where the test was done—just ask where the lab draws the line between negative or positive titers.

What if my child’s doctor does not understand or does not want to consider PANDAS?

Contact the International OCD Foundation or the PANDAS Physicians Network to find a doctor who may be knowledgeable about PANDAS.

Please note: NIMH does not evaluate the professional qualifications and competence of individual health care providers listed on these websites. The resources are provided for general informational purposes only. NIMH does not intend to provide specific medical advice on its websites, but rather to help visitors better understand mental health and disorders. NIMH will not provide specific medical advice and urges you to consult with a qualified mental health or health care provider for diagnosis and answers to your personal questions.

What are the treatment options for children with PANDAS?

Treatment with Antibiotics
The best treatment for acute episodes of PANDAS is to treat the strep infection causing the symptoms, if it is still present, with antibiotics.

If a properly obtained throat culture is negative, the clinician should make sure that the child doesn’t have an occult (hidden) strep infection, such as a sinus infection (often caused by strep bacteria) or strep bacteria infecting the anus, vagina, or urethral opening of the penis. Although the latter infections are rare, they have been reported to trigger PANDAS symptoms in some patients and can be particularly problematic because they will linger for longer periods of time and continue to provoke the production of cross-reactive antibodies.

The strep bacteria can be harder to eradicate in the sinuses and other sites, so the course of antibiotic treatment may need to be longer than that used for strep throat.

Tips for Parents or Caregivers

Sterilize or replace toothbrushes during and following the antibiotics treatment to make sure that the child isn’t re-infected with strep.

It also might be helpful to ask a health care provider to perform throat cultures on the child’s family members to make sure that none are “strep carriers,” who could serve as a source of the strep bacteria.

How can you manage neuropsychiatric symptoms of PANDAS?

Children with PANDAS-related obsessive-compulsive symptoms will benefit from standard medications; behavioral therapies, such as cognitive behavioral therapy (CBT); or both. OCD symptoms are treated best with a combination of CBT and a selective serotonin reuptake inhibitor (SSRI) medication, and tics respond to a variety of medications.

Children with PANDAS appear to be unusually sensitive to the side effects of SSRIs and other medications, so it is important to “start low and go slow” when using these medications. In other words, clinicians should prescribe a very small starting dose of the medication and increase it slowly enough that the child experiences as few side effects as possible. If PANDAS symptoms worsen, the SSRI dosage should be decreased promptly. However, SSRIs and other medications should not be stopped abruptly, as that also could cause difficulties.

What about treating PANDAS with plasma exchange or immunoglobulin (IVIG)?

Plasma exchange or immunoglobulin (IVIG) may be a consideration for acutely and severely affected children with PANDAS. Research suggests that both active treatments can improve global functioning, depression, emotional ups and downs, and obsessive-compulsive symptoms. However, there may be side effects associated with the treatments, including nausea, vomiting, headaches, and dizziness.

In addition, there is a risk of infection with any invasive procedure, such as these. Thus, the treatments should be reserved for severely ill patients and administered by a qualified team of health care professionals.

Should an elevated strep titer be treated with antibiotics?

No. Elevated titers indicate that a patient has had a past strep exposure, but the titers can’t tell you precisely when the strep infection occurred. Children may have "positive" titers for many months after one infection. Because these elevated titers are merely a marker of a prior infection and not proof of an ongoing infection, it is not appropriate to give antibiotics for elevated titers. Antibiotics are recommended only when a child has a positive rapid strep test or positive strep throat culture.

Can penicillin be used to treat PANDAS or prevent future PANDAS symptom exacerbations?

Penicillin does not specifically treat the symptoms of PANDAS. Penicillin and other antibiotics treat the sore throat caused by the strep by getting rid of the bacteria. In PANDAS, research suggests that it is the antibodies produced by the body in response to the strep infection that may cause PANDAS symptoms, not the bacteria itself.

My child has PANDAS. Should he have his tonsils removed?

Current research does not suggest that tonsillectomies for children with PANDAS are helpful. If a tonsillectomy is recommended because of frequent episodes of tonsillitis, it would be useful to discuss the pros and cons of the procedure with your child's health care provider because of the role that the tonsils play in fighting strep infections.

Researchers at NIMH and around the country conduct many studies with patients and healthy volunteers. We have new and better treatment options today because of what clinical trials uncovered years ago. Be part of tomorrow’s medical breakthroughs.

Talk to your doctor about clinical trials, their benefits and risks, and whether one is right for you.

Learn more about clinical research and how to find clinical trials being conducted around the country.

The Substance Abuse and Mental Health Services Administration provides this online resource for locating mental health treatment facilities and programs. Find a facility in your state, or see our additional resources.

Questions to Ask Your Doctor

Asking questions and providing information to your doctor or health care provider can improve your care. Talking with your doctor builds trust and leads to better results, quality, safety, and satisfaction. Visit the Agency for Healthcare Research and Quality website for tips.

This publication is in the public domain and may be reproduced or copied without permission from NIMH. Citation of NIMH as a source is appreciated. To learn more about using NIMH publications, please contact the NIMH Information Resource Center at 866‑615‑6464, email nimhinfo@nih.gov, or refer to our reprint guidelines.