The National Institute of Mental Health (NIMH) has announced the addition of a new domain to the Research Domain Criteria (RDoC) framework. The aim of the new Sensorimotor domain is to help foster earlier and more precise identification of the role of motor systems disruptions in psychopathology and aid in the development of more effective treatments for people who are affected with these disruptions.

RDoC, launched in 2009, was created in response to the growing awareness of challenges arising from the use of categorical diagnostic systems in research on mental illnesses. The concept was to create a system for investigating mental disorders by focusing on disruptions in normal adaptive functions rather than traditional symptom-based diagnoses. The development of the initial version of the RDoC framework was the collaborative effort of over 200 leading scientists.

The RDoC matrix is a tool for use by researchers to help them structure their study designs around behavioral or cognitive concepts. The most recent change to RDoC added a new domain—the Sensorimotor domain—to the five already included in the matrix: Negative Valence Systems; Positive Valence Systems; Cognitive Systems; Social Processes; Arousal and Regulatory Systems. 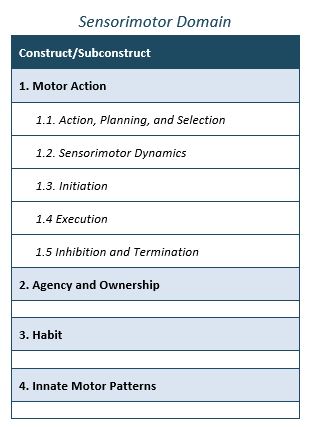 According to Bruce Cuthbert, Ph.D., director of the NIMH RDoC Unit, the addition of this domain represents an important step in the development of the RDoC framework. “Sensorimotor processes are implicated in a number of mental disorders, and research on dysfunction in these systems can contribute to an understanding of current psychopathology as well as risk for future psychiatric illness,” he added.

The organization of the new Sensorimotor domain is shown in the figure. The domain consists of four constructs (Motor Action, Agency and Ownership, Habit, and Innate Motor Patterns), the first of which includes five subconstructs. Detailed definitions of these domains and constructs can be found on the RDoC page of the NIMH website.

This change to the framework was spearheaded by the Changes to the RDoC Matrix (CMAT) Workgroup—a group made up of members of the National Advisory Mental Health Council, additional scientific experts, and NIMH staff experts. The addition of the new domain is intended to encourage a systematic approach to the study of motor function in psychopathology, which will hopefully lead to better identification of, and treatment for, these disruptions.

“We hope that the addition of this new domain will guide and encourage clinical and translational research on dysregulation in sensorimotor systems,” said Dr. Cuthbert. “However, investigators should be aware that the NIMH will not change its priorities with respect to basic research: NIMH will not accept applications primarily intended to study basic motor functions in animals or healthy human research participants.” To learn more, please read the Notice of NIMH Changes to the RDoC Matrix: Scope and Limitations of NIMH Support of the New Sensorimotor Domain.

The addition of the Sensorimotor domain is the latest example of RDoC as a dynamic research framework—one that evolves to incorporate the latest findings from the research community and provide exemplars for future research.