The noradrenergic system is of interest with regard to its involvement in several neuropsychiatric disorders, including depression, attention deficit/hyperactivity disorder, drug abuse and AD. Of special interest would be an effective PET radiotracer for imaging the noradrenaline transporter (NET), a drug target, for example, in depression. Such a radiotracer has been lacking through a paucity of good leads. Furthermore, the highest density of NET in human brain is in the small region of the locus coeruleus and is low compared to the highest densities of DAT found in putamen or of the serotonin transporter (SERT) in dorsal raphe. Hence, candidate radiotracers need to have very high affinity and excellent selectivity for binding to NET vs DAT or SERT. This severe selectivity requirement was strikingly demonstrated through our early study of two high affinity phenylpiperidine-type NET ligands, JZ-III-84 (Ki, 0.94 nM; cLogP, 2.81; 31) and JZ-IV-7 (Ki, 0.68 nM; cLogP, 3.80; 32), which also showed significant selectivity (> 18-fold and > 123- fold, respectively) for binding to NET over DAT and SERT. These were labeled with carbon-11 for evaluation of their radiotracer behaviors in monkey. Each radiotracer readily entered brain but gave highest uptake in striatum, typical of binding to DAT.39 In view of these findings, we sought to discover other high affinity candidates that also have much higher selectivity for NET (> 200) over DAT. A few already known compounds met these criteria, including desipramine (IC50, 0.97 nM; cLogP, 4.0; 33), talopram (IC50, 2.9 nM; cLogP, 4.0; 34) and talsupram (IC50, 0.79 nM; cLogP, 4.6; 35). Each was labeled with carbon-11 and evaluated as a radiotracer in cynomolgus monkey. Following administration of each radiotracer, radioactivity was taken up into brain and mostly retained over 90 min. Peak uptake was in the order 34 > 35 > 33. In each case, the regional distribution of radioactivity was almost homogeneous with little evidence of selective accumulation in NET-rich regions. A self-block experiment with [11C]desipramine resulted in greater uptake of radioactivity into brain, probably due to block of radiotracer binding to NET in the periphery (e.g. in heart), but no change in the brain regional distribution of radioactivity. Each radiotracer was rapidly metabolized to less polar radiometabolites.40 Our results with [11C]talopram and [11C]talsupram accord with those later reported by McConathy et al. from rhesus monkey.41

Racemic reboxetine is widely marketed as an antidepressant and has high affinity and excellent selectivity for NET. The (S,S)-O-methyl analog, (S,S)-MeNER (IC50, 2.5 nM; cLogP, 2.55; 36), has higher NET affinity than reboxetine, while retaining its excellent selectivity. (S,S)- MeNER was labeled with carbon-11 and provided quite successful autoradiographs of NET in post mortem hemispheric human brain slices, to the extent that binding of the radiotracer to locus coeruleus could be blocked by desipramine. Evaluation of this radiotracer in cynomolgus monkey42 showed adequate brain penetration followed by a slow washout of radioactivity from all inspected regions. At the end of the experiment (90 min) the ratio of radioactivity in NET-rich regions of interest (ROIs: mesencephalon, lower brainstem and thalamus) to that in NET-poor striatum were 1.4-1.6, so indicating some degree of NET-selective binding. In a pre-block experiment with desipramine the corresponding ratios at the end of the experiment were reduced to 1.05-1.2, although uptake of radioactivity into brain was higher. The low affinity antipode of the radiotracer was similarly taken up into brain but gave ROI to striatum ratios of 1.0-1.1 at the end of the experiment, again providing evidence that [11C](S,S)- MeNER gives a NET-specific signal, albeit of small magnitude. This radiotracer gave two radioactive metabolites in monkey and human plasma, one of which was more lipophilic but quite minor.43,44 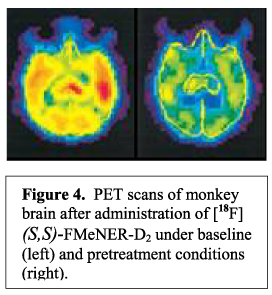 NET-specific binding and also ratios of specific binding to nonspecific binding increased throughout [11C](S,S)-MeNER baseline experiments in cynomolgus monkeys. Therefore, we considered that a close 18F-labeled analog, retaining a similar pharmacology, might prove a preferable radiotracer. We produced a [18F]fluoromethoxy analog with these desirable properties, namely [18F](S,S)-FMeNER (Ki, 3.1 nM; cLogP, 2.9; 37), for evaluation. In a baseline experiment in cynomolgus monkey, [18F](S,S)-FMeNER entered brain adequately and gave ROIs to striatum radioactivity ratios of 1.2-1.3 between 120 and 140 min. In a pre-block experiment with desipramine these ratios were reduced to near unity. However, in these experiments defluorination of the radiotracer to [18F]fluoride ion was evident by accumulation of radioactivity in skull. To counter this defluorination, we adopted a previously described strategy,45 namely replacement of the two hydrogen atoms on the carbon bearing the fluorine-18 with deuterium atoms in with the aim of reducing the rate of defluorination in vivo through a secondary isotope effect. The new radiotracer, [18F](S,S)-FMeNER-D2 (38), was confirmed to be less prone to defluorination in monkey in vivo and gave improved radioactivity ratios for ROIs to striatum of 1.4–1.6 at 140–180 min after administration. NET-specific binding peaked between 120 and 160 min.46 [18F](S,S)-FMeNER-D2 also provided good quality autoradiographs of NET in post mortem human brain hemispheres. Of the radioactivity bound to locus coeruleus in vitro, 53% was specifically bound. Other regions were found to have much lower levels of binding (maximally in cerebellum: 15% of that in locus coeruleus).47

[11C](S,S)-MeNER and [18F](S,S)-FMeNER-D2 are less than ideal PET radiotracers primarily because the magnitude of their NETspecific signals are small, which may be attributed in part to high nonspecific binding (as seen in the in vitro autoradiography48). We therefore sought to discover candidate radioligands that might present less non-specific binding through possession of a hydrophilic (e.g. hydroxyl) group.

(R)-Nisoxetine is a selective high affinity NET ligand, which in tritiated form has been used for in vitro autoradiography of NET53 and in 11C-labeled form has been found to be an unsuccessful PET radiotracer54. However, (R)-thionisoxetine (Ki, 0.2 nM; cLogP, 3.94; 18) has four-fold higher affinity.55 We prepared [S-methyl-11C](R)- thionisoxetine for evaluation and found that 2.4% of the dose administered to cynomolgus monkey entered brain. Washout of radioactivity from brain was slow and gave a maximal ratio of radioactivity in thalamus to cerebellum of 1.3.

At this time [11C](S,S)-MeNeR and [18F](S,S)-FMeNER-D2 remain the most advanced radiotracers for PET imaging of NET. [11C](S,S)-MeNER was used by the Karolinska Insitutet to assess NET occupancy by therapeutic doses of reboxetine in human subjects.56 Others have also assessed this radiotracer in rodent57 and baboon.58 Faster kinetics and higher signal were observed than in our experiments in cynomolgus monkey.59 However, [18F](S,S)-FMeNERD2 is superior in cynomolgus monkey60 and is scheduled to be evaluated soon in human subjects at the Karolinska Institutet.

Research in this area was in collaboration with Prof. C. Halldin (Karolinska Institutet), mostly conducted under a PhD studentship (Mr. M. Schou) within the NIH Karolinska Institutet Graduate Training Partnership in Neuroscience. Studies on reboxetine analogs and the LY compound were performed under a CRADA with Eli Lilly & Co. Studies with aryl piperidines were performed in collaboration with Prof. A. P. Kozikowski (Georgetown U., now U. Illinois at Chicago).