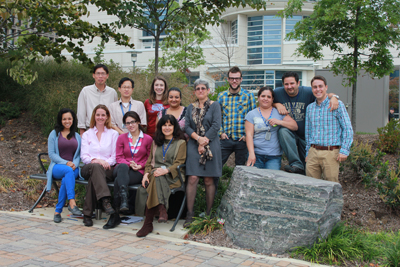 Neurotransmitters such as dopamine and glutamate are rapidly removed from the synaptic cleft after release, primarily through the actions of neurotransmitter transporters. These integral membrane proteins function to clear neurotransmitters that have been released from both synaptic and extrasynaptic sites. This uptake process is not only essential for the termination of neurotransmission, but also serves to reestablish the intracellular levels of the neurotransmitters for subsequent release.

Neurotransmitter transporters are secondary active transporters. By coupling the movement of Na+ ions down their electrochemical gradient, these carriers can transport their specific substrates against an energy barrier into the cell. In addition to their transport function, some of these carriers also act as selective anion channels. Using electrophysiological, cell biological, molecular genetic and biochemical techniques combined with transgenic animal models, our laboratory investigates the structure-function relationships, pharmacology, cellular regulation and molecular interactions of the members of the SLC1 and the SLC6 families.

In addition, biogenic amine neurotransmitter transporters are the primary targets for therapeutic antidepressants known as reuptake inhibitors, for psychostimulants such as cocaine and amphetamines and for methylphenidate, which is used to treat ADHD.  Thus, our aim to understand the function and regulation of these multifunctional CNS transporters is ultimately linked to the NIMH mission of providing improved prevention, diagnosis and treatment of mental illnesses.