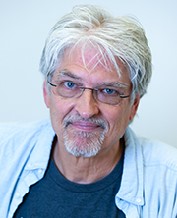 Lee E. Eiden is the Chief of the Section on Molecular Neuroscience in the National Institute of Mental Health Intramural Research Program of the National Institutes of Health, Bethesda, Maryland. He received his B.A. in Chemistry from Northwestern University in Evanston Illinois, and Ph.D. in Pharmacology from The University of Kansas, and was a Staff Fellow, PRAT Fellow, and Senior Staff Fellow in the NIMH Intramural Research Program before joining the faculty as a Principal Investigator and Chief of the Unit on Cell Biology in 1987, and Chief of the Section on Molecular Neuroscience in 1992. His work at the NIH has focused on stimulus-secretion-synthesis coupling, characterization of the vesicular and secretory proteins mediating chemically coded neurotransmission, including chromogranin A, VMAT1, VMAT2, and VAChT and signaling pathways underlying neuropeptide-mediated stress responses. More recently, the laboratory has been involved in microarray- and bioinformatics-aided gene discovery within neuropeptide-dependent stress-activated cellular signaling pathways in the central nervous system, and has characterized a novel cAMP sensor for neuroendocrine cell-specific GPCR-initiated signaling to the MAP kinase ERK. Dr. Eiden is a member of the editorial boards of Peptides, Cellular and Molecular Neurobiology, and Science Signaling. 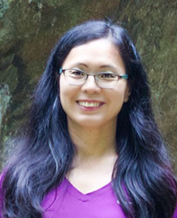 Wenqin (Wen) Xu, Ph.D., is a biologist and lab manager in the Section on Molecular Neuroscience (SMN).

Wen received her Ph.D. in Cell Biology from The University of Alabama at Birmingham, working with Dr. Casey Morrow on the initiation reverse transcription of HIV. Wen joined NIH in 2007 as a postdoc fellow in Dr. Maribeth Eiden’s laboratory where she identified a new exogenous retrovirus related to malignant neoplasias from Koalas in a US zoo. In collaboration with Dr. Lee Eiden’s laboratory she also established cAMP sensor cell lines expressing individual G protein-coupled receptor (GPCR) as a means of high throughput methodology for assessing individual GPCR function to guide drug screening.

Wen joined Dr. Lee Eiden’s lab in 2015. She works on developing a pharmacology for NCS-Rapgef2 and PACAP signaling using high throughput cellular screening assays in collaboration with NCATS. Her projects also include the study of downstream components of the NCS-Rapgef2 and ERK signaling in cellula. She is responsible for designing molecular biological experiments to generate transgenic and conditional knock-out mice using the CRISPR technique for animal studies.

Wen can be reached by email at xuwenqin@mail.nih.gov. 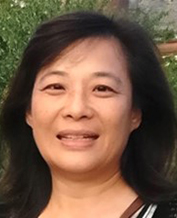 Sunny Zhihong Jiang, Ph.D., is a Staff Scientist in the Section on Molecular Neuroscience, the National Institute of Mental Health (NIMH), National Institutes of Health. Her long-term research interests are to identify the mechanisms by which gene expression and neural networks are influenced by, and interact with, environmental/psychogenic conditions to compound risk for development of neuropsychiatric disorders; aim to the development of targeted interventions. Her current research interest focuses on molecular/cellular/circuitry mechanisms underlying neuropeptide PACAP and dopamine mediated adaptive and maladaptive responses to stress. Sunny (Zhihong) received B.S. in Biology from Zhejiang University, Hangzhou, China. In 1997, she received her Ph.D. in Molecular Biology from Shanghai Institute of Biochemistry, Chinese Academy of Science (now named Institute of Biochemistry and Cell Biology, SIBS, CAS). During her research experience in Washington University in St. Louis as a postdoctoral fellow then an instructor, and later in NIMH, she is well trained as a neuroscientist in cellular/molecular and systems neuroscience.

Sunny (Zhihong) can be reached by email: zhihongjiang@mail.nih.gov 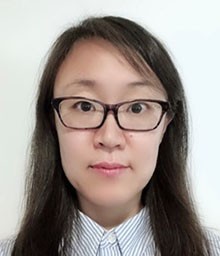 Haiying Zhang, Ph.D., joined Dr. Lee Eiden’s laboratory in the Section on Molecular Neuroscience (SMN) as a contractor scientist in 2019. She has been well trained as a pharmacological and behavioral neuroscientist for the fundamental mechanism studies using cellular, molecular and transgenic technologies. She is now the key personnel in the lab for the maintenance of all mouse colonies based on her expertise and experience. Also, she is studying the role of NCS-Rapgef2 signaling to ERK in the dopamine D1 containing neurons in the nucleus accumbens under psychostimulants treatment by using whole transcriptomics analysis.

Dr. Haiying Zhang pursued her Ph.D. degree majoring in tumor cell biology at the National Center of Biomedical Analysis (NCBA) in Beijing, one of the most prestigious research institutes in China. Then, she was invited to the National Institute on Drug Abuse (NIDA) by Dr. Eliot Gardner as a post-doc fellow in 2009 to study the molecular mechanisms of endocannabinoids system underlying drug abuse and addiction. After 5-year post-doc training, she was promoted to a Research Fellow position at NIDA to further explore the role of endocannabinoids in other psychiatry disorders, such as eating disorders and medication development of drug addiction. In 2017, she was recruited to join in the Behavioral Neuroscience Laboratory at Johns Hopkins University as a research associate to study the neural mechanisms in hypothalamic regulation of glucose and energy homeostasis. 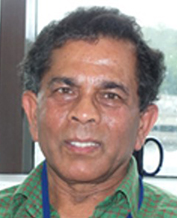 Babru Samal, Ph.D. is a special volunteer in bioinformatics in the Section on Molecular Neuroscience (SMN). Under Dr. Isaac Bekhor’s tutelage at the University of Southern California, he received his Ph.D. degree in Molecular and Cellular Biology (1977) working on the role of nuclear proteins in gene expression. He continued the regulation of gene expression work at Baylor College of Medicine, Houston in the laboratory of Dr. Harris Busch and then at the Princeton University in the laboratory of Dr. Abraham Worcel where he carried out the seminal initial works on nucleosomal phasing.

Babru worked at Amgen Inc, (1981-1999) on therapeutic drug development by cloning and characterizing functions of novel genes. PBEF (NAMPT), LIF, IL-15 were some of the products he discovered or demonstrated functional role utilizing proteins expressed in heterologous systems. In addition, he worked on EPO gene transfer to mouse liver in collaboration with Dr. Lawrence Kedes of USC.

Babru joined NeuralStem Inc as the principal scientists in charge of discovering novel genes in human neuronal stem cells via microarray analysis as well as by sequencing cDNA tags. At Psychiatric Genomic he was the Director of Neurogenomics, deciphering the gene expression profile in depression, bipolar and schizophrenia to develop markers for better drug discovery for psychiatric diseases.

Since 2003, Babru is working at NIMH where he does high throughput gene expression data analysis, first with Husseini Manji working on depression microarrays. Since 2005, he is at SMN, first as a staff scientist and then as a special volunteer.  He was in charge of bioinformatic core (2005-2011) and has contributed to the understanding of  the regulation of gene expression by PACAP, in BCC, PC-12 and in NSA-1 cell lines as well as in knockout mice by analyzing microarray as well as single cell RNA seq data. His compilation of CNS transcription and its regulation is available at https://www.molecularbrain.org.

His website https://www.genetools.us has a collection of tools for bioinformatics data analysis. 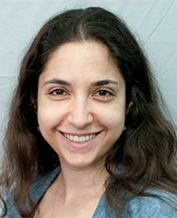 Dana Bakalar, Ph.D., is a Postdoctoral IRTA Fellow in the Section on Molecular Neuroscience (SMN). She is trained as a behavioral neuroscientist, but has been slowly transforming into a programmer, working first in Matlab and now in Python and R to analyze mouse behavior and to explore datasets. Since 2019, Dana has been working with Dr. Lee Eiden and the SMN team to understand the role of the neuropeptide PACAP in environmental-stress-induced repetitive behavior, using the CleverSys HomecageMonitor system and a custom-written Python program. She is also investigating the significance of the transcriptional variants of the gene Rapgef2, exploring its expression patterns during neurodevelopment.

Dana can be reached by email at dana.bakalar@nih.gov. 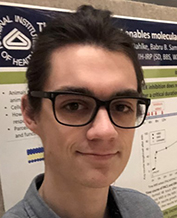 Sam Dahlke is a Postbaccalaureate IRTA Fellow in the Section on Molecular Neuroscience (SMN). Sam graduated from Grinnell College with a Bachelor’s in Biology, researching homeostatic plasticity at the Drosophila and mouse neuromuscular junctions under Dr. Clark Lindgren. At Grinnell, Sam also enjoyed serving as a mentor and TA in Biology classes, assisting students through the foundational portions of their degrees. They previously worked under Drs. Snehajyoti Chatterjee and Ted Abel in the Abel lab at the Carver College of Medicine investigating the role of immediate early genes in the hippocampus and contextual learning. In the Eiden lab Sam is exploring the activity of the MAP kinase ERK and its role as a memory molecule in RAPGEF2-dependent signaling cascades. They are interested in the intersections of molecular neurobiology, neurophysiology, and pharmacology. Sam wishes to elucidate how the effects of molecular interactions ripple out to cellular and circuit-level plasticities and ultimately learning, memory, and cognition. By investigating the biological basis of mental health, Sam hopes to work towards a more compassionate, understanding, and just world. 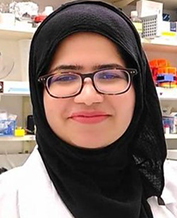 Tabinda Salman is a graduate student enrolled from University of Karachi, Karachi, Pakistan and working as a supplemental Pre-doc Fellow in the Section on Molecular Neuroscience (SMN), Laboratory of Cellular and Molecular Regulation (LCMR). She is an experienced researcher with a demonstrated history of working with different behavioral animal models, neurochemical analyses, and gene expression studies. Since 2019, Tabinda is working under the supervision of Dr. Lee Eiden and working to understand the activation of ERK and psychomotor stimulant action in nucleus accumbens, receiving an experience in advanced confocal microscopy, unbiased behavioral observation with the CleverSystems Behavioral Monitoring system for mice and transcriptomic microarray analyses.

Tabinda received her B.S. in Biotechnology and M.S. in Molecular Medicine (research domain: neuropharmacology) from University of Karachi (2015). She is currently completing her doctoral thesis under the supervision of Dr. Shamshad Zarina (National Center for Proteomics) and Dr. Darakhshan Haleem (Panjwani Center for Molecular Medicine & Drug Research) and studied differential effects of psychomotor stimulants on behavior and monoamine metabolism in various mice brain regions. Following her experiments in home lab, she is now a participant in the NIH Graduate Partnership Program (GPP) at SMN to gain the versatility as a neuroscientist under the esteemed supervision of Dr. Eiden.