RDoC is a research framework for investigating mental disorders. Its goal is to foster new research approaches that will lead to better diagnosis, prevention, intervention, and cures.

RDoC is not meant to serve as a diagnostic guide, nor is it intended to replace current diagnostic systems. The aim is to understand the nature of mental health and illness in terms of varying degrees of dysfunction in fundamental psychological/biological systems. 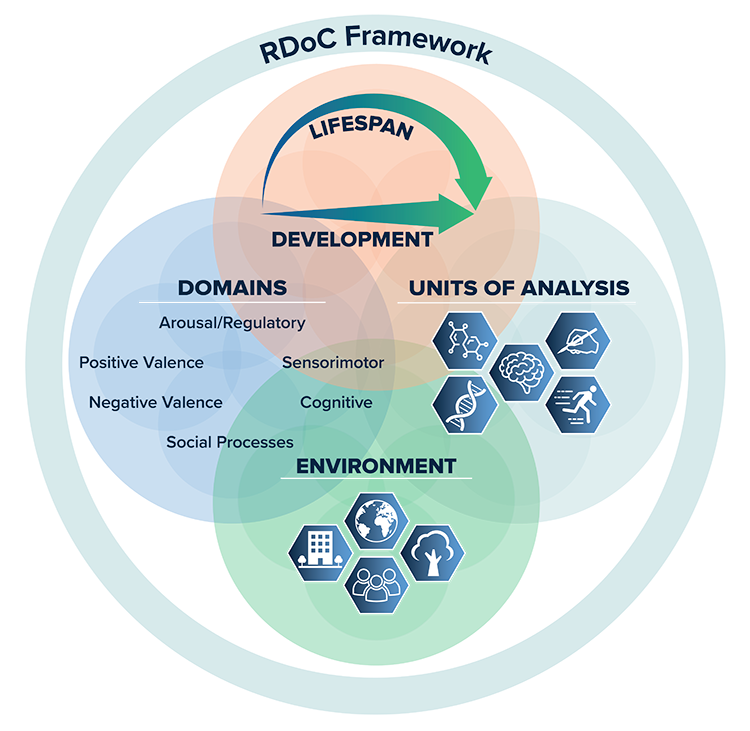 The RDoC framework provides an organizational structure for research that considers mental health and psychopathology in the context of major domains of basic human neurobehavioral functioning, rather than within established diagnostic categories. The framework currently includes six major functional domains (see figure). Different aspects of each domain are represented by three to six psychological/biological dimensions, or constructs, which are studied along the full range of functioning from normal to abnormal. Both behavioral and biological aspects of functioning change and mature throughout childhood/adolescence and across the life span, and so research on development is essential. Equally important is the study of various aspects of the environment, including the physical environment, cultural components, and factors such as social determinants of health. The RDoC framework encourages researchers to measure and integrate many classes of variables (units of analysis, e.g., behavioral, physiological, and self-report data) in order to seek a comprehensive understanding of the construct(s) under study.

At the outset of the RDoC initiative, NIMH convened a series of workshops to identify an initial set of concepts for investigation (domains, constructs, and units of analysis). These components were originally devised as a matrix, with constructs listed in rows and units of analysis in columns. The RDoC matrix was proposed as a means to offer the field some concrete examples that could be considered for study and was not intended to be a complete or fixed compendium of RDoC related topics. As such, the matrix should be seen as a heuristic, acknowledging that the RDoC framework will change and grow as new scientific advances emerge.

The aim of RDoC is to provide data about basic biological and cognitive processes related to mental health and illness, broadly conceived. New insights generated by research using the RDoC framework are intended to inform the development of mental health screening tools, revisions to diagnostic systems, and preventive and treatment interventions.

Traditionally, mental illnesses have been conceptualized as disorders that are diagnosed on the basis of the number and type of symptoms, and the presence of distress or impairment. This view of mental disorders – and the resulting diagnostic systems – provides benefits such as reliability and ease of diagnosis across a variety of contexts; however, this approach has come at the cost of numerous tradeoffs including the following:

These problems, and others, suggest that in order to understand both the development and treatment of mental disorders, the field needs a comprehensive picture of typical and atypical brain and behavioral development across the lifespan. It is essential to find a way to increase knowledge concerning the biological, physiological, and behavioral components and mechanisms through which multiple and interacting mental-health risk and protective factors operate – a research framework that does not rely on disorder-based categories.

The RDoC project, launched in 2009, was the response to the growing awareness of these issues. The development of the RDoC matrix was the collaborative effort of over 200 leading scientists who worked together to articulate and define the knowledge for each of the domains and constructs in the matrix. Since its inception, RDoC has grown into a significant initiative for NIMH.