The Push for Suicide Prevention

I wrote in my welcome message about my priorities. First, we need to fund excellent science. Second, we should support studies that will yield benefits on short, medium, and long-term timescales. I also have three particular areas of interest: neural circuits, computational and theoretical psychiatry, and suicide prevention. Here I will discuss possible approaches to suicide prevention, representing an area of research with the potential to yield benefits in the short-term.

“I’m feeling good now. But I just know that someday, this disease will kill me… even though I know I don’t want to, I know that at some point, I’m going to try to try again, and sooner or later, it’s going to work.”

When I heard these words from a patient I had gotten to know very well over the course of a few years of weekly meetings, I could feel the terror she felt. My patient suffered from bipolar disorder, and over those first few years she had attempted suicide at least twice, once taking so many pills it seemed a miracle that she woke up three days later. A combination of supportive therapy and medication changes had brought her back from the brink. She had been stable for over six months when she uttered these words. It was only in hearing them that I began to fully comprehend the suffering she had endured, and the tremendous challenge she faced in confronting the fear that suicide would end her life.

I knew that my patient was not alone. The suicide rate in the U.S. has been gradually rising over the past 15 years. Over 40,000 individuals died by suicide in 2014.1 Tragically, 425 of these were pre-teens and young teenagers; the Centers for Disease Control and Prevention recently reported that death by suicide has now exceeded death by motor vehicle accidents for U.S. children aged 10-14 years for the first time in history.2 The reduction in automobile accidents is due, in large part, to successful prevention efforts, like improved structural design and additional safety features. I believe the time is right for a similar push for suicide prevention. Here I want to discuss why I believe this, and what the role of the NIMH can be in such a push. 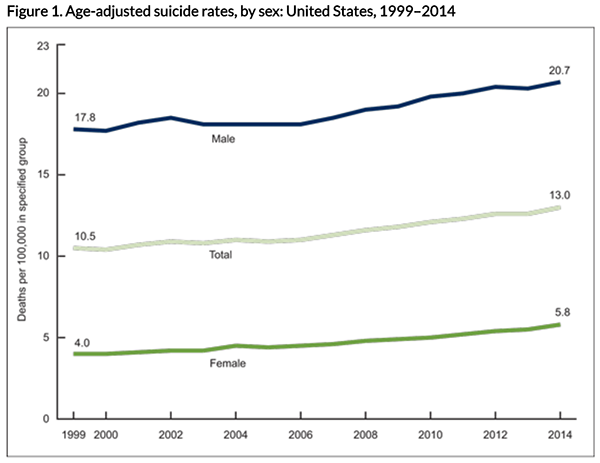 NOTES: Suicide deaths are identified with codes U03, X60–X84, and Y87.0 from the International Statistical Classification of Diseases and Related Health Problems, Tenth Revision. Access data table for Figure 1 at http://www.cdc.gov/nchs/data/databriefs/db241_table.pdf#1.

First, the data. It might seem cold, reducing human suffering to numbers, describing with quick catch-all terms what I know to be thousands of complex, unique lives lost. But these statistics give us critical clues as to where to focus our efforts. For example, nearly half of suicide victims used a firearm to kill themselves.3 Many of these victims were veterans; 7,700 veterans died of suicide in 2014, two-thirds of them using a firearm.4 These data suggest that lives could be saved by reducing access to lethal means in at-risk individuals. Likewise, statistics suggest that identifying at-risk individuals in healthcare, correctional, and military settings would have tremendous impact. About half of all suicide victims were seen in healthcare settings within the preceding 30 days.5 Nearly 8,000 were seen in emergency rooms for suicide attempts in the preceding year.6 531 suicides occurred in jail or prison, and suicide claimed 269 lives among active duty military members.7,8

How can we identify such at-risk individuals? Answering this question was an important step taken by the Prioritized Research Agenda for Suicide Prevention, a program of the public-private National Action Alliance for Suicide Prevention. To this end, NIMH has partnered with several federal agencies and private healthcare systems to identify who is at high risk for suicide. One of our first efforts was with the Army. In 2009 we helped launch the Army Study to Assess Risk and Resilience in Service Members (STARRS), a multi-faceted approach to identifying soldiers most at risk for suicide. The Mental Health Research Network, a collaborative effort of private sector HMOs, the NIH Common Fund, and the NIMH, has been engaged in similar efforts in civilian populations. Their Suicide Prevention Outreach Trial (SPOT) used a single depression screening item (suicidal ideation intensity) to define a high-risk sample of 20,000 patients. SPOT focuses on treating this ideation as a means to prevent suicidal behavior.

These methods, while successful, still miss a considerable fraction of at-risk individuals. Several recently concluded NIMH-funded studies demonstrate that we can do much better with the proper tools. For example, the Emergency Department Safety Assessment and Follow-up Evaluation (ED-SAFE) study tested the Patient Safety Screener, a simple instrument that improved providers’ ability to identify at-risk individuals in emergency room settings. If instituted nationally, this tool would identify and refer more than 3 million additional at-risk individuals each year. A similar screening tool, the Ask Suicide-Screening Questions (ASQ), was developed in the NIMH Intramural Research Program and has been validated in adolescent populations; it is now being studied in emergency rooms. The NIMH has also partnered with the Department of Veterans Affairs (VA) to develop a quantitative algorithm that identified VA patients at high-risk, using simple questionnaires and clinical information.9 Based on the VA’s success, the Mental Health Research Network is now using similar approaches to identify at-risk civilians across multiple healthcare plans.

Of course, the goal of our efforts is not only to identify at-risk individuals, but to treat them, improve quality of life, and prevent deaths. A crucial next step involves testing various prevention strategies. To this end several NIMH-funded projects are underway. The Mental Health Research Network is using their Patient Health Questionnaire (PHQ)-9 screening tool to refer high-risk patients to treatments aimed at reducing suicidal ideation; this trial will include about 20,000 at-risk patients.10 Building on the ED-SAFE findings, the University of Massachusetts Health "Systems of Safety” study will test combined screening, safety planning, and referral practices. The VA is implementing their prediction algorithm in a trial to examine whether referral to follow-up care can reduce suicide attempts in identified high-risk individuals. The New York State Office of Mental Health, in partnership with Columbia University, is studying the efficacy of safety planning measures. The Suicide Prevention for at-Risk Individuals in Transition or “SPIRIT” study, co-funded by NIMH and the National Institute of Justice, involves individuals recently released from prisons and jails, and will also test the effects of safety planning in conjunction with case management. These efforts in private, VA, public, and justice sectors will guide the way towards implementation strategies with the potential to have major public health impact.

How major? The American Foundation for Suicide Prevention, an important advocacy group and a member of the National Action Alliance, commissioned a modeling effort, calculating the potential effects of interventions such as those described above, coupled with means reduction efforts such as gun safety programs. They estimate that simply applying evidence-based practices has the potential to reduce the national suicide rate by as much as 20 percent. It is an achievable goal, consistent with the early results from the research studies described above. We can identify those at risk; we have efficacious treatments currently being tested in real-world settings. We now have a chance to bend the curve on suicide rates, to save the lives of thousands of individuals, like my patient, caught in the throes of psychiatry’s biggest killer. We owe it to them to give it our best effort.

9 McCarthy JF et al. Predictive modeling and concentration of the risk of suicide: implications for preventive interventions in the US Department of Veterans Affairs. Am J Public Health. 2015;105(9)1935-42.