Disparities in mental health play outsized roles in our society. People from racial and ethnic minority populations, as well as those from lower socioeconomic strata,1 and those who live in rural communities,2 are less likely to have access to mental health care and more likely to receive lower quality care. There have been recent investments in community mental health centers and the expansion of Medicaid, but more work is needed to eliminate these disparities. To address mental health disparities, we need to identify and understand the contributing factors and study the efficacy of programs to remedy them. In recognition of National Minority Mental Health Awareness Month, I am highlighting this important element of NIMH’s research portfolio.

From causes to effects

In some ways, addressing disparities in the mental health system should start with the basics—and by that, I mean basic science. In our search for the roots of mental illnesses, an area that has made great progress over the past five years is genetics. As I have written about before, we now know hundreds of places in the genome where genetic variation raises the risk for psychiatric disorders. While we can be justifiably proud of these successes, we must also acknowledge a serious shortcoming—historically, the vast majority of the subjects in these genetic studies were of European ancestry, and it is therefore unclear how much these discoveries will benefit the majority of people of differing ethnicities.

Emerging data from an NIMH-funded study of the genetics of post-traumatic stress disorder (PTSD), for which our Psychiatric Genetics Consortium made a concerted effort to include studies with participants from the African American community, illustrates the importance of recruiting subjects from diverse genetic backgrounds. This analysis, which combined data across 11 multiethnic studies, revealed strong heritability and overlap between the genetics of PTSD and that of schizophrenia.  These were interesting scientific findings—but limited in that they only applied to the Caucasian participants. It turned out that the genetics of the African American sample set was much more complex and varied than in Caucasians, so even though the researchers had included data from a large number of African American participants, there were still too little data to provide information on disease heritability with respect to African genetic ancestries. These and other data point to the need to increase the recruitment of individuals of African descent in our psychiatric genetics studies, as we are doing with NIMH’s component of the NIH-wide H3Africa program, a collaborative effort to enroll large numbers of individuals from sub-Saharan Africa in genetic studies of schizophrenia, as well as an NIMH-supported effort to increase the diversity in genetic studies of autism, schizophrenia and bipolar disorder.

*Persons of Hispanic origin may be of any race; all other racial/ethnic groups are non-Hispanic
AI = American Indian, PI = Pacific Islander

Like the causes, the consequences of mental illnesses differ for minorities as well. Nowhere is this more evident than for one of the most devastating effects of mental illnesses: suicide. According to the Centers for Disease Control and Prevention, the rates of suicide vary significantly by race/ethnicity (see figure). In particular, individuals from American Indian and Alaska Native (AI/AN) communities die from suicide at significantly higher rates than whites or other racial or ethnic minorities—the suicide rate for AI/AN youths is especially alarming, being over 3.5 times higher than those among racial/ethnic groups with the lowest rates.three collaborative research “hubs” that bring together academics, tribal leaders, and peers. These partnerships aim to build capacity for research in AI/AN communities; to determine what factors lead to this increase in suicide risk; to develop and tailor treatments that work in these communities; and, to learn how to implement these strategies using novel approaches and technologies suited to the unique needs of AI/AN communities.

In addition to supporting these research hubs, the NIMH has participated along with other federal partners in the Arctic Council’s RISING SUN initiative, aimed at reducing the incidence of suicide in indigenous groups living in the far northern regions of North America, Europe, and Asia. A major output of this effort is the RISING SUN toolkit, which aims to help clinicians, communities, policymakers, and researchers measure the impact and effectiveness of suicide prevention efforts in rural and tribal communities.

The good news is there are treatments that work, even if they don’t always work for everyone. Recent research has shown, however, that paying attention to differences in treatment responses in specific groups can help make our treatments work better. Including diverse groups in research can also reveal why there are differences in treatment effects. A case in point: an NIMH-funded study published just last year showed one way to improve the effectiveness of depression and anxiety treatment in Hispanic youth.5 Scientists were studying two alternative methods of delivering treatment to adolescents suffering from anxiety and depression in primary care settings: one, an “assisted referral to care” method that helped patients get care at an outpatient mental health center, and the other, a “brief behavioral therapy” delivered in the primary care setting itself.

The results of the trial showed that in the non-Hispanic group, children generally did better with the therapy delivered in the primary care setting, with about 50 percent of children responding to the treatment compared to 30 percent who received assisted referral care. 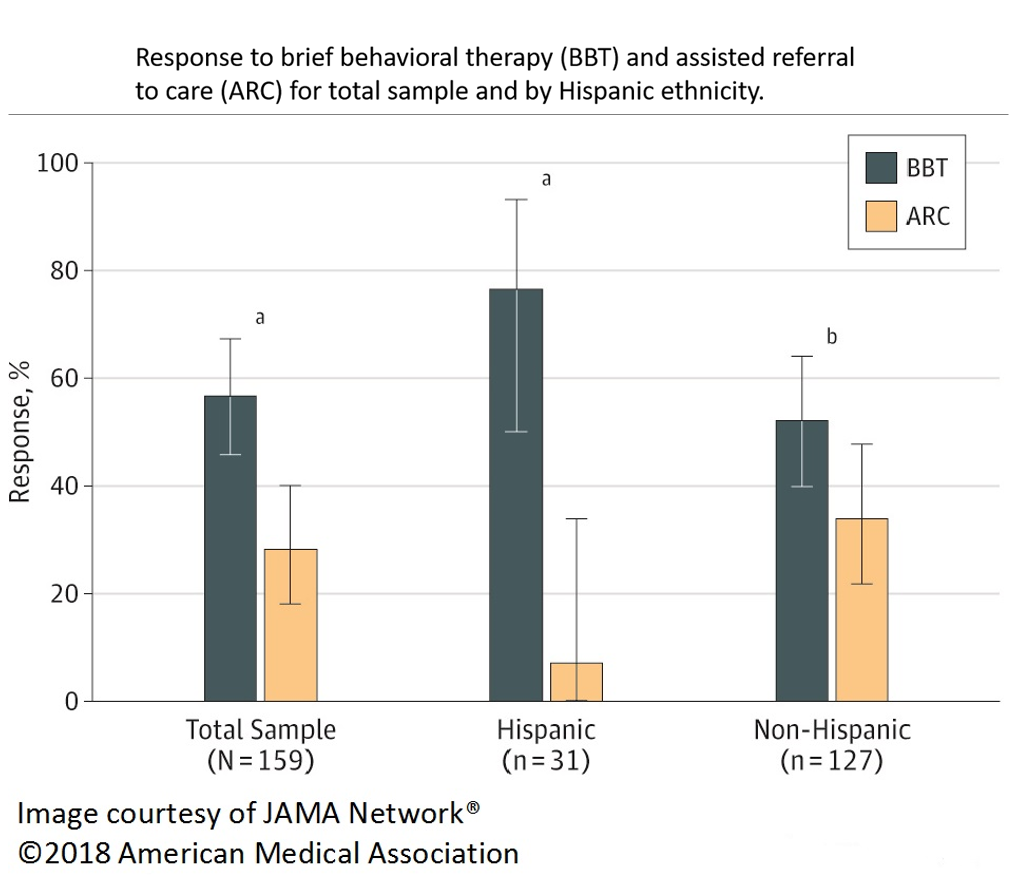 Of course, most of mental health disparities are not so easily addressed. In particular, we need to know more about the “whys” behind these disparities, so that we can begin to design strategies to remedy them. An ongoing NIMH-supported study is examining the effects of dietary supplementation with vitamin D and omega-3 fatty acids on depression in the elderly. Early results from the study suggest that the effects of these supplements vary with ethnicity. The scientists are using the second phase of the study to try to ask why. Do individuals from different ethnic backgrounds absorb these substances differently? Do they have different metabolic responses to the supplements? That study is examining biological factors contributing to mental health disparities; other NIMH-supported efforts focus on psychosocial factors such as the impact of race-related violence exposure on mental health, or the environmental and social factors behind elevated rates of depression in minorities.

Finally, we must acknowledge that disparities in access to care arise from workforce issues as well. The distribution of psychiatrists and other mental health care professionals is skewed heavily towards urban areas. Rural areas, and areas with many residents in lower socioeconomic classes, are particularly underserved. NIMH supports several studies aimed at understanding the precise distribution of the mental health workforce in relation to its needs, the impact of this distribution on minorities and others in underserved communities, and potential remedies, including the use of task-shifting and telepsychiatry approaches.

The future of disparities research at NIMH

One of the most important things we can do to understand the sources of these differences is to promote diversity in research, both in those who participate in clinical research and those conducting the research. Innovative approaches aiming to solve problems that contribute to mental health disparities will pave the way toward equitable and appropriate care for all individuals.