There’s a piece of your brain called the hippocampus. It is about the size of your pinky; curled up right next your ventricle, a fluid-filled cavity deep within your skull. It is called the hippocampus because Julius Caesar Aranzi, a 16th-century anatomist at the University of Bologna, thought it looked like a sea horse (hippocampus is Greek for seahorse).

Some 400 years later, in the 1950s, William Beecher Scoville, M.D., a neurosurgeon at Hartford Hospital, met a young man named Henry Molaison (also known as H.M.) suffering from intractable epilepsy. Scoville figured out that the seizures were coming from Henry’s hippocampus, and he did what surgeons did back then — he took it out. Henry’s seizures disappeared. But Scoville realized Henry wasn’t quite right afterward and asked a psychologist named Brenda Milner, Ph.D., to help him figure out what was going on. Milner and Scoville discovered that Henry had lost the ability to encode new memory — he could tell you all about his childhood, but he couldn’t remember your name by the time he finished.

In the 1970s, Tim Bliss, Ph.D., and Terje Lømo, M.D., Ph.D., working with Per Andersen, M.D., Ph.D., in Oslo, Norway, showed that the nerve cells deep within the hippocampus could “remember” what happened to them in the recent past by strengthening the connections between them. For the first time, we humans began to understand how it is that our brains allow us to string together ideas and images and words into cogent memories.

Now, back in 16th century Bologna, did Aranzi know any of this would happen? Could he see off into the future where his life’s work was headed? Unlikely. He could plant the seed, but he knew he’d never see the finished result. Someone else would have to come along and carry his work forward into the far-off promised land of the future. In science, each of us knows that we may not see the future fruits of our labor. We each take our turn, leaving the next discovery to the next generation.

My father is not a scientist, but he must have had an intuitive grasp of this concept of playing a small part in a larger, longer effort. He had a job that moved our family around a few times. Not many times, just a few. But I distinctly remember, each time we moved into a new house, pretty much the first thing my Dad did was drag us kids to a nursery, pick out a few trees, and haul them back to the house; the root balls crammed into the back of our ‘77 Ford LTD station wagon, the leafy arbor sticking out through the wide-open rear window. We’d spend the next day or two digging holes big enough for the root balls in the front or back or side lawn, wrestling the young but still hefty trees into their pits, freeing up the root balls, filling in all around with the dirt we had just painstakingly dug up, and watering and watering and watering, until my Dad figured that would be enough and we could call it a day.

By the move to our third house, the one in Silver Spring, Maryland, not far from the National Institutes of Health, I had caught on to the fact that while the trees inevitably grew a bit, year by year, it was also inevitable that we would move again long before they truly blossomed. Long before those trees overreached the house, rubbing up against the asphalt shingles of the roof; long before they arched gracefully over the street, forming those picturesque tree tunnels one always sees sheltering lonely country lanes; long before those trees truly came into their own, providing full shade and pure air and enduring beauty; long before the hard work of planting truly paid off, we would surely move again, buy some more saplings, and start all over. So, I asked my Dad, why do this? Why spend all that money, time, and energy planting trees that we won’t even be able to enjoy?

Perhaps, had my Dad been a rabbi, he would have told me of the famous Midrash – a traditional Jewish apocryphal story with many variations -- about the Roman emperor Hadrian who once passed by an old man who was planting a fig tree. When the emperor questioned the point of planting a tree when he wasn’t going to live long enough to benefit from it, the old man explained: “The same way my ancestors planted for me; I am planting for my descendants.” But my Dad was not a rabbi, so he just pointed at a much older tree, shading a different part of our yard. “How do you think that one got there? Someone had to plant it. We’re just taking our turn. Now keep watering.”

It is a lesson not lost on scientists. In the mid-1980s, a British scientist by the name of Jeffrey Gray, Ph.D., got to talking with another scientist named Neil McNaughton, Ph.D. They knew well the work of Milner and Scoville and their patient, H.M. And they also knew about Bliss and Lømo’s work, describing how cells in the hippocampus can “remember.” They realized that the memory functions of the hippocampus might also be used to help an animal figure out when to be afraid, by recognizing dangerous situations and triggering anxiety.

Soon thereafter, in New York, as a newly minted psychiatrist and neuroscientist, I was inspired by the Mosers’ work. I measured the electrical activity in the bottom part of the hippocampus in mice and found that anxiety-provoking situations increase activity there. My student, Avishek Adhikari, Ph.D., then showed that the hippocampus talks to another part of the brain, the prefrontal cortex, triggering anxiety symptoms. And while Adhikari and I might not have figured out exactly how this all works, or how to stop the hippocampus and prefrontal cortex from talking to each other and making life miserable for those who suffer from anxiety disorders, I know someone else will read about what we’ve done, take their turn, and advance the science even further.

A little while back, I had the occasion to bike by our old house in Silver Spring. The trees out front are tremendous; they shade the house and beautify the street. When we planted them 40 years ago, they weren’t much taller than I was; they’re taller now than I ever would have imagined. To me, each of those beautiful trees is evidence of the power of doing your part for future generations, of the tremendous potential embedded in what we do in the here and now to impact others for generations to come. 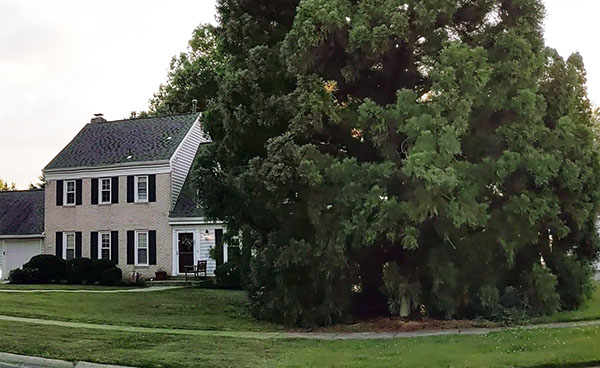