In the fall of 2016, just as I was starting out as NIMH Director, I was asked a lot of questions about how NIMH spends its budget. I decided back then that NIMH should be as transparent as possible about what we fund. Accordingly, in early 2018, I reported an analysis of our portfolio from 2007 through 2016, describing NIMH expenditures in terms of the proportion of funding going toward research in three areas—fundamental basic research, disease-related basic research, and therapeutics development and services research. These three areas of research correspond roughly to science that aims to have public health impacts in short-, medium-, and long-term time frames.

Fundamental basic research aims to understand how the brain works, how it is influenced by its environment, and how it guides behavior. Disease-related basic research includes research with humans and experimental systems aimed at understanding the mechanisms of mental illnesses. Therapeutics development and services research focuses on the detection, prevention, epidemiology, causes, and treatment of specific disorders or conditions. It also includes implementation science and services research aimed directly at improving the quality and equity of mental health care delivery.

The 2018 portfolio analysis showed modest shifts in NIMH expenditures among these three areas that likely reflected changes in NIMH’s scientific priorities. In particular, I noted that efforts to revamp and modernize NIMH’s investments in drug development (culminating in a revised framework for clinical trials called the experimental therapeutics approach) may have had the unintended consequence of reducing the number of applications—and therefore the proportion of funding—going toward treatment development and services research. I also described NIMH’s then-nascent efforts to reverse this trend.

Now, four years later and five years into my tenure as NIMH Director, I decided it was time to take another look at NIMH’s portfolio balance, to see where we have come from and where we are headed.

Shifts in the portfolio reflect new policies and priorities

The reasons for the uptick in the proportion of funding going toward applied research in recent years are undoubtedly multifactorial. But at least some of this uptick is due to an increase in applications in areas such as services and implementation research, the result of concerted efforts by the NIMH program staff, including those in the Division of Services and Intervention Research (DSIR). These efforts have encouraged high-priority research aimed at testing novel intervention and implementation strategies in real-world settings through programs like the ALACRITY centers. These efforts have clearly paid off: applications to DSIR have increased from 329 in 2016 to over 600 in 2020. We’ve also seen an increase in the numbers of applications seeking to address mental health disparities.

Another factor has been NIMH’s renewed emphasis on suicide prevention research. I articulated suicide prevention as a near-term research priority in my very first year as Director. Through the hard work of many NIMH staff, including members of our Suicide Prevention Research Team, we have been actively publishing funding announcements and articulating priorities for novel approaches to research in this area. These efforts, too, have been enormously successful—grant funding for suicide prevention research has doubled since 2016 (Figure 2)—and nearly all of this research falls into the therapeutics development and services research area. Together, these and other efforts have significantly increased NIMH’s investments in research with the potential for near-term impact on public mental health. 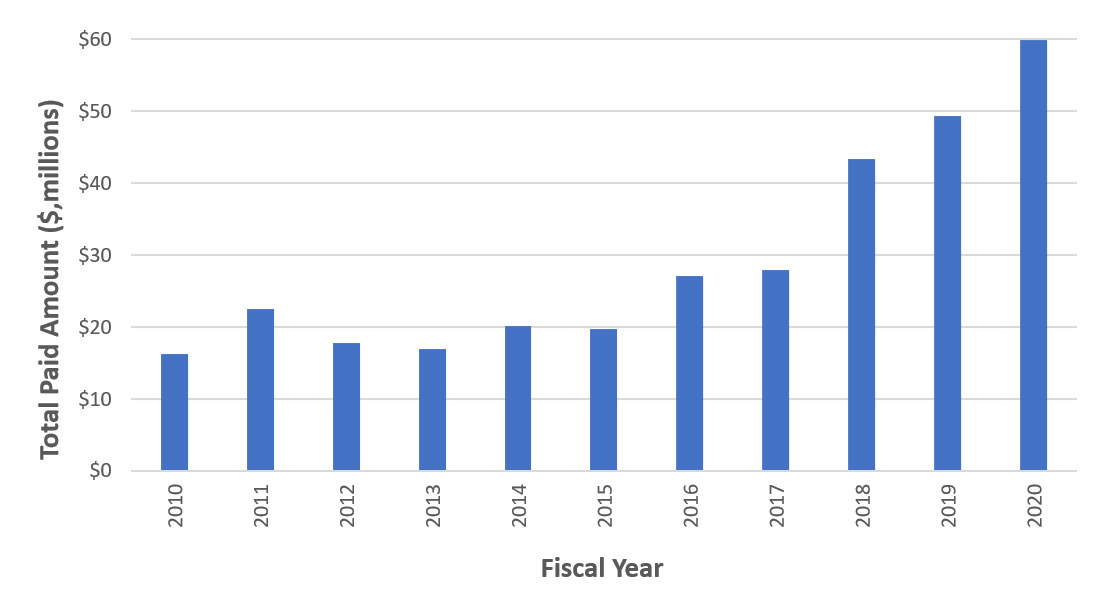 It is less clear what underlies shifts in funding within the basic research portfolio, from disease-related to fundamental basic research. One potential contributing factor may have been NIMH’s efforts to define priorities in research that uses model organisms. For several years, NIMH has been engaging the scientific community in a series of discussions on the appropriate design and use of experimental systems for studying the neural mechanisms underlying mental illnesses. This process culminated in a Notice in the NIH guide, summarized in an accompanying Director’s Message, that articulated the message that model organisms are not models of disease but rather experimental systems in which specific hypotheses may be asked about neurobiological mechanisms. As a result, some research projects that had been conceptualized as disease-related—because they incorrectly asserted that they were studying an animal model “of” a mental illness—may now be presented more accurately as fundamental basic research investigating neurobiological and behavioral processes. Other potential explanations include shifts within specific portfolios from disease-related basic research to more translational efforts. For example, in our genetics and neuroimaging portfolios, researchers have begun to shift away from simply defining the genetic risk factors and neurobiological patterns associated with mental illnesses and towards applying these findings to solve important clinical problems.

What is the right balance?

A more difficult question to answer than “What is NIMH’s portfolio balance?” is “What is the right balance?”  There are many opinions about what the NIMH portfolio balance should be. Some would have us invest more heavily in science that helps people now, even though existing treatments (even when provided optimally) are not effective enough to help the majority of people achieve full recovery. Others would have us spend more on science that will bring the truly transformative treatments of tomorrow, even though there are so many people in need right now that even modest improvements in treatment access or efficacy could have significant public health impacts.

One way to judge the appropriateness of NIMH’s current mix of investments is to compare NIMH to NIH as a whole. While the three-area categorization scheme described above would be challenging to replicate across the entire NIH portfolio, there is one well-defined category of therapeutics research, clinical trials, that is reported across NIH. As it happens, the proportion of NIMH funds spent supporting clinical trials mirrors closely that of NIH overall over the past decade (Figure 3). These data suggest that NIMH investments in clinical research are in line with priorities of the larger biomedical research enterprise represented across the NIH.

The information I’ve just shared sheds light on the current balance of research grant expenditures at NIMH and demonstrates how shifts in NIMH priorities can have intended and unintended effects on that balance. I hope it also gives some context to help our constituents understand how carefully we think about our management of this balance. I will continue to provide periodic updates on the NIMH portfolio, here and in regular reports to the National Advisory Mental Health Council. While this transparency may not resolve differences in opinion between supporters of one kind of science or another, it will at least remind everyone of the fact that NIMH seeks to support a diverse portfolio that supports science across a range of timeframes, ensuring maximal impact now and in the future.