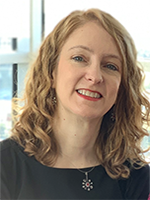 Sarah Hollingsworth “Holly” Lisanby, MD, is Director of the Division of Translational Research at the National Institute of Mental Health (NIMH), which funds research on the discovery of preventions, treatments, and cures for mental illness across the lifespan. She founded and directs the NIMH Noninvasive Neuromodulation Unit which specializes in the use of brain stimulation tools to measure and modulate neuroplasticity. She is JP Gibbons Professor Emeritus at Duke University and was the first woman to serve as Chair of the Duke Department of Psychiatry and Behavioral Sciences. She founded and directed the Duke University and the Columbia University Divisions of Brain Stimulation, where she built interdisciplinary research programs specializing in the convergence of Psychiatry, Neuroscience and Engineering. She co-led the NIH BRAIN Initiative Team focused on large-scale neural recording and modulation devices. Dr. Lisanby’s team pioneered magnetic seizure therapy (MST) as a novel depression treatment from the stages of animal testing, first-in-human, and now international trials. She has received international recognition including the Distinguished Investigator Award from the National Alliance for Research on Schizophrenia and Depression, the Max Hamilton Memorial Prize of the Collegium Internationale Neuro-Psychopharmacologicum, and the Eva King Killam Research Award from the American College of Neuropsychopharmacology.